Alibaba co-founder Joe Tsai paints the landscape for 21st century competition and cooperation between the U.S. and China at the 2019 Sokwanlok Distinguished Lecture

With the United States as the world’s dominant power and China as the world’s rising power, we are poised to enter a period of profound geopolitical and geoeconomic change. Joe Tsai, who is the co-founder and executive vice chairman of Alibaba Group, offered unique insights into one of the most important international relationships of our time.

Held at the UC San Diego School of Global Policy and Strategy (GPS) on Feb. 14, 2019, the sold-out Sokwanlok Distinguished Lecture on China illuminated a series of questions about how to maintain peace and prosperity between the two world powers, including how to invest in education and nurture future generations.

“Our relationship with China looms very large. At GPS, we use insights from research and teaching to build our partnerships,” said Dean Peter Cowhey. “The relationship between the U.S. and China is key and one that has defined the evolution of the 21st century.” 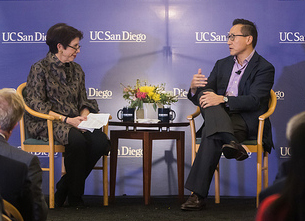 In its 21st year, the Sokwanlok Lecture was born out of a vision by Marion and Kwan So to educate the American public about China and enhance the mutual understanding between the two peoples of China and the U.S.  Bringing top leaders from China and elsewhere to offer front-line insights and analysis, the series looks at the most pressing economic and political trends of our time.

“Since the inaugural Sokwanlok Lecture in 1998 with Professor Wang Gungwu, the series has brought some of the most distinguished scholars and important leaders on China to UC San Diego,” said Professor Barry Naughton, Sokwanlok Chair of Chinese International Affairs.

For over 40 years, the So family has lent their service, leadership and generosity to the university. At a time when the interaction of Asia and the Americas is at a pivot point for profound change, the significance of this lecture series is greater today than ever before. They also helped found the 21st Century China Center at the School in 2011, as a touchstone of their passion to foster greater U.S. and China understanding.

As the longest serving member of the advisory board for the School, Kwan So has played a key role positioning UC San Diego as one of the world’s top universities for education and research on contemporary China. The So family hopes to inspire others in the community to contribute to the ties between U.S. and China.

“My goal is to make GPS the best school to study China in North America,” said Kwan So when interviewed. “I’m glad my family has supported me along this journey. U.S.- China relations are just too important to be left to the governments.”

During his conversation with Professor Susan Shirk, chair of the 21st Century China Center, Tsai cited three major factors – trade, business and intellectual capital – that have contributed to the current landscape and tension between the two countries, as well as their independency, such as the 68,000 American companies operating in China that create $600 billion in revenue each year.

“I find it quite interesting that I have to refresh people’s idea of the symbiosis between China and U.S.,” said Tsai. “The reality on several levels is that the countries are very dependent on each other.”

Regarding competition, Tsai rejects the notion that it is a contest. He referenced a rising level of fear in the American psyche, due in part to the hollowing out of manufacturing jobs to technological and military advances that China has gained over the past few decades.

“There is a sense of anxiety that sometime in the future China will be more competitive than we are,” said Tsai. “America today is still a preeminent global power, but we sit in the midst of the worst storm we’ve seen.”

When speaking about the what lies ahead for China, it is clear that both Shirk and Tsai hope to see a future that is intertwined. Tsai stressed the importance of using technology for the shared benefit of human kind, creating parallel universes that work well together.

One of the key areas of overlap is intellectual capital, particularly in universities, where Chinese and Americans have come together most fruitfully. Contributing greatly to American life and activity, both countries will hurt if symbiosis is not fostered.

“We have to live together in a constructive way. People will find ways to reach out, to find areas of cooperation. There’s a lot of room for cooperation,” said Tsai.

For a full album of the evening’s lecture, visit here.