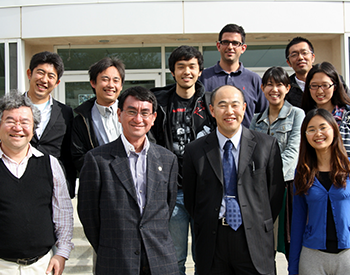 The Center on Global Transformation (CGT) at the UC San Diego School of Global Policy and Strategy (GPS) hosted Minister Kono as a Pacific Leadership Fellow (PLF) in February 2011. At that time he was serving his fifth term and was also director general of LDP's international bureau.

Having completed its 11th year, CGT now has hosted 85 fellows from 21 different countries. The program invites outstanding leaders from around the Pacific region and beyond to engage in dialogue, research and instruction.

“A main goal of our PLF program is to bring policymakers, business executives and intellectual leaders to our campus who shape policy and strategy in their own countries, to foster exchange and provide new insights into how economic and political systems are evolving,” said CGT Director Gordon Hanson, who is also serving as acting dean of GPS.

Hanson added that during his residency Minister Kono also guest lectured in a master’s-level course on Japanese politics for GPS students.

“Known as a reformer with extensive Washington connections — senators, congressmembers and State Department officials as well as leading venture capitalists and entrepreneurs — Minister Kono represents the type of government practitioner from whom our students and faculty value learning,” Hanson said.

Minister Kono also met with leaders from the San Diego Japanese community and presented a public talk on "Securing Japan's Future: How the Liberal Democratic Party (LDP) Can Meet the Economic and Security Challenges." He concluded his stay with a tour of San Diego military bases where he remarked he gained insight into finding ways to improve relations between military bases and local communities.

The son of former chief cabinet secretary Yohei Kono, Minister Kono is known as a “political maverick” who isn’t afraid to speak his mind, even on sensitive issues. In 1996, at age 33, he was first elected to the House of Representatives and has been re-elected without fail since.

Widely regarded as the most accomplished English speaker in Japanese politics, Minister Kono received his bachelor’s degree in foreign service from Georgetown University and also attended the Central School of Planning and Statistics in Warsaw, Poland. While studying in Washington, D.C., he served for Congressmember Richard Shelby, now the senior U.S. Senator from Alabama, for two years.

“During his residency at CGT, Kono impressed me and my political science colleagues with his sharp wit and deep insights on policy issues. There is no one more intellectually fitting to be a Minister of Foreign Affairs than him. Kono is also refreshingly direct, who can breathe new life into Japanese diplomacy and politics,” said Megumi Naoi, associate professor in the UC San Diego Department of Political Science. 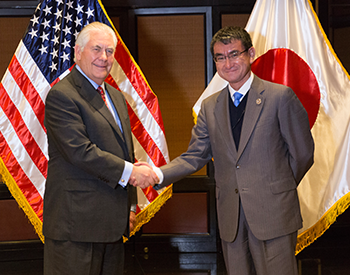 Prior to his new appointment, he served in Prime Minister Abe’s Cabinet as chairperson of the National Public Safety Commission. Since assuming his new role, Minister Kono has held several diplomatic meetings, including the “two-plus-two” meeting of the Japanese and U.S. foreign and defense ministers held in Washington, D.C. on Aug. 17. It is widely believed he will be tasked to coordinate closely with the U.S. in the face of North Korea's continued missile and nuclear development, and China's growing regional power in Asia.

“GPS and its research centers strive to provide a vibrant forum for intellectual discourse, and a hub for analysis, debate, learning and policy strategy design with leaders from the Pacific region. We are proud to count Minister Kono among our PLFs, and look forward to any opportunity to work with him to strengthen U.S.-Japan relations,” said CGT Executive Director Ulrike Schaede, who also serves as director of the Japan Forum for Innovation and Technology.