Roughly 50 alumni returned to GPS for its annual Winter Connections event, meeting with and lending advice to the students soon to enter their alumni network 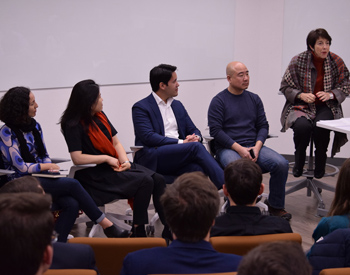 Whether it is cutting short a long-awaited gap year in Italy to instead crash on friends’ couches in D.C., patiently navigating the application process on USAJOBS.gov or riskily taking an interview during one’s last legal week in the U.S. on a student visa, every graduate from the UC San Diego School of Global Policy and Strategy (GPS) has a story behind finding a means to end their job search.

And last month, as part of the School’s Winter Connections event, some were given the floor to share those tales and more with the people who wanted—and needed—to hear them most: current students at the School.

Roughly 50 alumni returned to campus Jan. 27-28 for the annual networking event. Now in its eighth year, Winter Connections offers current students of the School the opportunity to pry into the lives and careers of professionals who once were in their shoes—and receive from them no-holds-barred responses about the elations and hardships that lie ahead.

The 2017 event comprised an entire day of information sessions led by alums, as well as an informal dinner. Early-morning mock interviews between students and more alumni anchored the second day.

While a focus of the two-day affair was what happens after graduate school, some alumni opted to backpedal to the present in their information sessions, encouraging students to not lose sight of the fact they must do well now to prosper later.

“If you can be one of the top students here, the sky is the limit,” encouraged Victor Tineo ’11, an international economist at the U.S. Department of Treasury. “If you have the skills and motivation to do really well at this school, take that mindset and conscientiousness to your job and your job search.  You won’t only get a job, but you also will do well in your work.”

Quantitative proficiencies and econometrics, other alumni noted, are skills students should tout when on the job hunt. 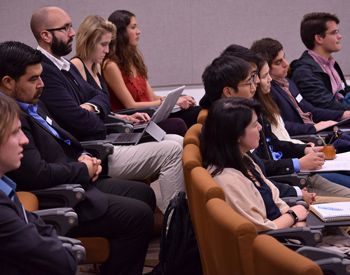 Matt Siordia ’12, a Mexico desk officer at the International Trade Administration, noted “it’s a combination of understanding the numbers and using that to shape policy” that sets GPS graduates a part in the workplace—“and knowing how to speak normally about the numbers to other humans,” chimed in Alison Miranda ’03.

Miranda, as deputy director of impact evaluation at Social Impact, said she still often uses her Stata training from the School, including testing job candidates on their skill level.

Siordia, appropriately, pointed to Acting Dean Gordon Hanson’s Topics in International Trade course as what he applies most within the Department of Commerce.

Aside from a mental strength in numbers, alumni also pointed to the School’s strength in the number of alumni willing to help one another secure positions after graduation or later in their careers.

While Victor said “LinkedIn is your best bet to find an alum,” other alums such as Sun Hwa Song ’10 urged networking offline.

“Meeting alumni in person is the best way to forge a connection, just like today,” said the statistical analyst at the World Bank.

“The GPS alumni system is awesome,” he said. “You can pretty much reach out to anybody, and they will respond to you.”

Later in the day, UtilityAPI CEO Elena Lucas ’12 concluded her information session with a demonstration of Foo’s praise.

“If anyone would like to talk more, come with me to Home Plate,” she offered.