Under the dim lights of the RIMAC Arena, two banners stand. 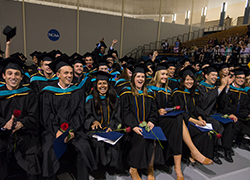 Stage right is one clad with the emblem for the School of International Relations and Pacific Studies (IR/PS). Stage left is one with the new logo for the School of Global Policy and Strategy (GPS). Parked in between the two is the class of 2015.

They are the final IR/PS graduating class, the group that bridges the gap between the School’s successful past and promising future.

“Today you stand in the frame of a wide open door,” said Christiana Figueres, executive secretary for the United Nations Framework Convention on Climate Change (UNFCCC). “Today each of you is poised to walk through the door that leads to the next chapter of your life.”

“You’ve learned from the some of the world’s best scholars here at UC San Diego, and you’ve learned from each other,” UC San Diego Chancellor Pradeep Khosla said. “Now you are uniquely poised to shape public policy and address global challenges since you are graduating from the only professional school in the country focused on the Pacific region.”

On top of the degrees tallied, Cowhey offered his own by-the-numbers breakdown of the class of 2015. The students completed internships in 15 countries, he shared, and three graduates are Presidential Management Fellows. Four is the number of flat tires a group of students endured during their participation in the Baja Project. In addition, 11 graduates are military officers and 11 others from foreign ministries.

“Although the students have travelled different routes to today’s graduation, they have built friendships and intellectual bonds that will continue to span borders and cultures,” Cowhey said. “More than anything, the students have become a tight knit community, a family.”

He turned it over to Joshua Twisselman, an MPIA candidate and the 2015 peer-elected class speaker. Speaking intimately of the past two years, Twisselman quipped about Professor Philip Lau’s statistics class, the arctic temperatures in the computer lab and even the stand against the “infamous lunch thief of 2014,” when the class replaced someone’s stolen sandwich with a dozen new ones. 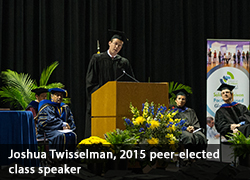 “In addition to what we’ve learned in the classroom, we should also look back to appreciate the unique perspective we’ve gained from one another,” Twisselman said. “Our class hosts a variety of faiths and differing political ideologies. While debates in the lounge can get a little heated at times, it’s that intellectual stimulation that makes this program all the more enriching.”

As such, Cowhey added: “There is important work to be done to make the 21st century a time of great progress for all of the world’s population. Our graduates have the skills and the spirit to do this work.”

This year’s guest speaker, Figueres guided graduates where to put their new know-how to use. Among other accomplishments, Figueres founded in 1995 the Centre for Sustainable Development of the Americas and served as director of the technical secretariat for the Renewable Energy in the Americas. She assumed her UNFCCC executive secretary role in 2010.

“You were all born last century, but you are the prime architects of this century,” she told the class. “The decisions you and the rest of your generation make over the next 10 to 25 years will define the very nature of the 21st century. You will write the social contract of this century. Contrary to the previous contracts, it will have to address global concerns just as much, or even more so, than national and local concerns.”

She went on to offer a few points to be addressed in that contract. Foremost was infrastructure, tackling how to support 9 billion people despite climate uncertainties. And on those climate uncertainties, the contract “will have to bring human development into harmony with the natural world,” she said. Also, it must measure that development beyond economics and instead through environmental sustainability and social welfare.

“My generation has tried its best,” Figueres said. “We now turn to you, as members of society but also as individuals.”

Continuing on that note, Khosla encouraged graduates, “If you stumble on your way to success, I urge you to get back up and continue on.” Wittily, he reminded it took Thomas Edison 10,000 attempts to invent the light bulb and Walt Disney was once fired for not being imaginative enough. Winston Churchill failed the sixth grade, he added.

“Find your passion,” Khosla concluded. “Ignore the naysayers. And do what you can to make this world a better place.”