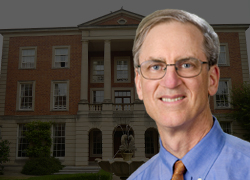 On a July afternoon, Roger Bohn is unpacking in his new office, now located on the third floor of the UC San Diego School of Global Policy and Strategy (GPS) building.

Most of his books already are stowed away on a shelf, his desk topped with tools for every day use and he is dusting off what, by a quick glance, appears to be old speedometers or peculiar clocks.

“These are aviation instruments,” explains Bohn, associate dean and professor of management at GPS.

While he has a bevy of them, Bohn clarifies he does not collect the gadgets because he’s a pilot. Rather, he’s done so through conducting research for his forthcoming book, “Daredevils to System Operators,” which explores the evolution of flying methods over 100 years.

Bohn took this particular research abroad for the first time this summer as part of the University of Oxford’s Harris Manchester College Summer Research Institute, held for nine days from late June to early July.

“What I’m researching and writing a book on is how flying turned from an art into a science,” he said. “I’m generally interested in the difference between art and science and how things move from one to the other.” 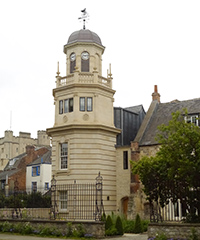 (Look no further than his blog, “Art and Science in Technology,” for more on this.)

The Summer Research Institute welcomes one academic or senior administrator from participating institutions to Harris Manchester College each year to undertake research or finish writing up a project. Thomas Barranga, assistant professor at GPS, attended on behalf of GPS last summer.

“The nature of this program is it’s ‘time to write,’” Bohn said. “I did a lot of writing.”

He also utilized Oxford’s libraries and visited a museum for further research inspiration, playing the role of an informal aviation historian—something he’d done only in the U.S. for this research up until this point.

“Any time you’re studying change you want to know what was the old and what’s the new. Usually, I’m able to use academic articles for this,” he said, noting that this project is different in that it is not as heavily documented. “I’m not normally a historian, but it’s been fun digging through old documents.”

In many respects, Bohn’s foray into aviation has been an extension of his previous research surrounding technological knowledge.

Keeping to a steady research theme

Upon joining GPS in 1992, Bohn brought with him an expertise in high-tech and international manufacturing, specifically in the electronics and data storage industries. He’s since spent several years researching process improvement in the semiconductor industry and coauthored a book on the evolution of firearms manufacturing. He also serves as a consultant to the semiconductor and electricity industries, consulting on manufacturing ramp-ups, process improvements, product development and organizational management.

Among his most noteworthy tomes are “From Filing and Fitting to Flexible Manufacturing” (2005) and “Spot Pricing of Electricity” (1988). “Daredevils to System Operators” will make for his latest published book.

Mainly, being on the ground in England for the book kept Bohn’s wheels turning toward the Royal Air Force.

“One of the stories I tell in my new book is about the use of aviation checklists, which were invented in the U.S. in the late 1930s just before World War II,” he said. “Everybody thinks they were heavily used in World War II, but my research suggests they actually were not, but rather in the ’50s. This leads to the question of, ‘Why did the Royal Air Force not use them, even though they were losing lots of pilots in accidents?’”

It’s a conundrum that relates back to that steady theme in his scholarship—how technology moves from an art to a science and, as a result, improves over time.

“The reason I’m studying aviation is that I was interested in surgery,” he said. “Surgeons say modern aviation safety checklists are not applicable to medicine. Surgery and healthcare in general have been under some pressure to use a more standardized model of how to deliver healthcare. The arguments surgeons make are basically that surgery is an art, and it can’t be turned into a science. I wanted to look at another profession where people made the same arguments, which is flying.

While “Daredevils to System Operators” awaits a publication date, chapters in the form of working papers are available online.