­­Refining research in the thick of the Brexit

As someone who is making a name for herself by studying public opinion about foreign policy, particularly with an eye toward nativism and isolationism, Lauren Prather’s trip to the University of Oxford’s Summer Research Institute fell on the perfect week—the one following the people of Britain’s vote to “Brexit.”

The assistant professor at the UC San Diego School of Global Policy and Strategy (GPS) flew to the country two days after its historic vote to sever ties from the EU on June 23.

While the rest of Britain was confronting an aftershock and even political turnover, through Prather’s eyes: “This was a really amazing time to be in the U.K., after an event in which public opinion really mattered. The public voted on a specific policy option, which doesn’t happen all that often, especially for foreign policy, at the national level in representative government.”

The Summer Research Institute, held June 26 - July 3, welcomes one academic or senior administrator from participating institutions to Oxford’s Harris Manchester College each year to undertake research or finish writing up a project. Professor Roger Bohn attended in 2015 on behalf of GPS.

“It was an interesting opportunity to go and reflect on my research agenda from a beautiful setting like Oxford,” Prather said. “I had never been before, and it was neat to see such a historic university and spend some time on its hollowed grounds. You can get inspired just by hearing about all of the people who had been there before.”

As for the Brexit component of her trip, Prather clarified, it’s too soon to contemplate how the event might fit in her research agenda. Nonetheless, it got her pondering more about the isolationists she already is studying in the U.K. and who voted to leave the EU.

It makes sense, given Prather spent the bulk of her week at Oxford rounding out a research project investigating how economic ideology and isolationism shape attitudes toward foreign aid.

The project, which stems from her dissertation research at Stanford University, uses original British public opinion data as well as data from seven other donor countries. It unveils that in many donor countries there is a split among liberals between isolationists and internationalists in terms of their support for foreign aid. A large portion of liberals who support government intervention to help the poor at home seem to believe caretaking should stop at the water’s edge.

By the end of her stay, Prather had accomplished time well-spent. She had packaged her survey data from this project and put the results to paper. 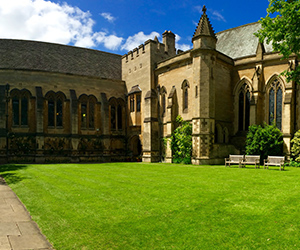 “This was an opportunity to say, ‘This one week, I’m going to shut myself off from my other projects and really focus on this one piece of research,’” Prather said. “It also was nice to be in an environment with hard-working people that had completely different research programs they were engaged in.”

This facet, building a professional network with scholars in fields outside of her own, was among Prather’s favorite parts of the Summer Research Institute, she said.

“It struck a balance of being able to work on political science, my research, during the day and then over the meals I shared with other members of the institute, I heard really interesting work I would have never gotten to hear otherwise,” she explained. “It was a nice escape.”

Now, back at GPS with her mind revitalized, Prather said she’s looking forward to what’s in store for her second year at the School, particularly continuing working with the master’s students who made such an impression on her in her first year.

“The absolute high of the year was discovering what awesome students GPS has,” Prather recollected. “These are people who have elected to pursue a graduate degree, are interested in the subject matter and have life experiences they can bring into the classroom. That’s really fun and engaging for me as a faculty member.”

For the remainder of summer, Prather is finishing up several projects and gearing up to chair a roundtable discussion at the American Political Science Association on a new model of peer review that granted her paper, “The Effects of Authoritarian Iconography,” entry into a special issue of Comparative Political Studies. Read the article to learn more about that project.