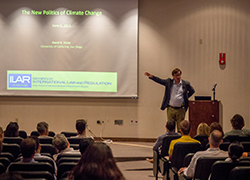 When did you identify climate change as an interest of yours?

DV: I did a lot of work on atmospheric chemistry and physics when I went to graduate school at Massachusetts Institute of Technology in political science. I spent a lot of time working with people who were trying to uncover the mysteries of the ozone layer. It struck me that that’s a problem that wouldn’t get studied systematically by a political scientist. That’s basically how I ended up working on environmental issues. Climate change is the granddaddy of environmental problems and frankly also of development problems, energy market problems and so on. It brings together all of these issues that are very important for political scientists—how governments coordinate policy, how policies affect the structure of international markets, patterns of investments, choices in technology that investors make, etc. That’s the landscape in which I work.

Over the years, what changes have you seen in the evolution of the climate change conversation?

DV: I am old enough to have been at the first climate change negotiation that began in the late 1980s in New York at the U.N. I spent a lot of time going to those negotiations early on, both participating and writing policy papers. Then, I stopped going for 20 years because they weren’t doing anything. Talking, but not doing.

The good news about this year is the negotiations leading to Paris (a.k.a., COP21/CMP11 or ‘Paris 2015’) are much more likely to produce an agreement than any negotiations in the last 20 years. That’s because we’ve shifted from a top-down regime, where you have diplomats trying to set goals for countries and failing, to a bottom-up regime, where the countries themselves are able to make pledges as to what they’re going to do. That shift is good news. It’s given a lot more flexibility for developing countries like Brazil and China to feel they can make proposals that reflect their own development priorities and yet are doing something for the collective, international good. That’s where we stand right now and there is some optimism about this.

But you also have voiced some pessimisms, noting to Reuters “Paris will be a funeral without a corpse,” for example. What did you mean by that?

DV: The pledges the countries are making are not much more ambitious, if any more ambitious at all, than what the countries would have done if they thought about what policies make sense from their own perspective. When you add up all those pledges, they won’t be sufficient to really stop global warming quickly, which is what a lot of scientist say is necessary. They don’t add up to nearly enough reduction in emissions to stop warming at 2 degrees (Celsius). This is the source of this comment when I was talking to Reuters. For the last decade, the entire diplomatic community has been organized around stopping warming at 2 degrees. People are going to recognize in Paris the idea of ‘2 degrees is dead,’ but nobody is going to actually say that.

What’s it like being a part of the minority vocalizing the 2-degree goal is dead?

DV: We’ve had a tremendous amount of negative press and controversy around the statements we made in Nature last fall about 2 degrees. I think they’re completely accurate. I think those statements we made are absolutely robust and are becoming more robust the closer people look at them. But it’s a huge cognitive dissonance problem because the diplomats and the NGOs don’t want, for the most part, people to recognize that we just can’t stop warming at 2 degrees. We’ve got to plan for a world that’s going to be much warmer. The effects are going to be more horrific, and the need for attention to adaptation issues, not just controlling emissions, is rising very rapidly.

Realistically, what must international diplomacy hone in on about this issue?

DV: If they get out of Paris an actual agreement, it will have been the first time diplomats have arrived at a major climate change conference and left with a significant agreement at hand for the first time in 18 years. The last time it happened was Kyoto in 1997. We just need some sobriety as to how slowly the international legal system really works and those agreements are going to take a while to really have an impact.

Meanwhile, a lot of climate scientists say we don’t have a while. We’ve got to deal with that reality. You have to help societies prepare for inevitable impacts of climate change: more extreme weather events, higher sea level, big impacts on natural ecosystems, all of the stuff we in the scientific community has been talking about. Paris will turn a corner in having an impact on emissions and on demonstrating a new way of negotiating commitments. But it won’t turn a corner in dealing with the reality that we’re in for a lot more warming than people had actually expected.

For a full rundown of Victor’s press clips relating to this topic, visit Storify.com.