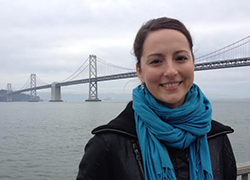 Lauren Prather is all about picking people’s brains.

Specifically, for the past five years as part of her dissertation at Stanford University, she’s been analyzing American public opinion on how cash and material aid to help the poor is given domestically and abroad.

“In one chapter of my dissertation, I ended up discovering that Americans do not like foreign aid in general regardless of its form,” she said. “While I was able to replicate the finding from American politics research that Americans prefer domestic welfare assistance to be given in-kind rather than in cash, I found that for foreign aid it didn’t matter. People just opposed both.”

As such, Prather’s left with some unanswered questions. And, as the newest assistant professor at the School of Global Policy and Strategy (GPS), she is all hands on deck to get them answered through her work inside the classroom and beyond. She’ll start in fall quarter with two seminar classes on public opinion and foreign policy and the political economy of foreign aid.

Both courses will integrate the Diplomacy Lab, an initiative through the U.S. State Department that calls on college students to prepare policy research to present to the Department on real-world issues.

In the foreign aid class, students will be granted access to a State Department website that disseminates data on U.S. foreign aid projects. The objective is to paint a picture of where the aid is going and how effective it is, Prather explained.

“The Earth is warming, which means the Arctic Ocean is starting to open up,” Prather explained. “There’s the issue of drilling and other foreign policy challenges on the horizon due to climate change. The State Department wants to know what the U.S. public knows about the Arctic, what issues they care about and how it can communicate better with the U.S. public about what it’s doing there.”

Prather’s experience fits hand in glove with both courses, given her aforementioned dissertation project entitled, “Fighting Poverty at Home and Abroad: Explaining Redistributive Attitudes and Behaviors.

She also plans to flesh out what she’s started in her dissertation by identifying further linkages between domestic and foreign policy opinions, exploring different foreign policy issues and investigating opinion in countries outside the U.S.

“For my work on the determinants of foreign aid, my focus has been on developed countries because those are the primary donors of foreign aid,” Prather said. “It’s also important to set aside this American-centric focus in the study of foreign policy and start to test some of the ideas we have in other countries.” 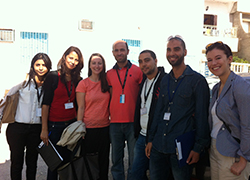 Applying a domestic foundation to a foreign focus

For starters, she is looking at attitudes about the government using violent force domestically and in international politics.

“There is a small literature that suggests that people who are more supportive of the death penalty are also more supportive of warfare abroad,” she said. “I want to explore this idea in further detail to understand how people use values they’ve learned in the domestic context to inform their attitudes about foreign policy.

Also in pursuing her Ph.D., she traveled to Tunisia last fall to conduct field surveys during that election to gather an understanding of how international election observers’ evaluations of elections affect the local population’s beliefs about elections.

“The Tunisia project was my first time implementing a project abroad,” she said. “It was a big learning experience.”

In the fall, she has another project going into the field in the Middle East.

Coordinating from afar, Prather again will be looking at what’s going on in people’s heads. This time she will try to understand how authoritarian iconography, meaning how large images of authoritarian leaders such as on billboards, affect political compliance among domestic populations.

“We have some theories in political science that these images are used by leaders to get their population to obey them,” Prather said. “No one has really tested that empirically to see if those images actually have that effect. That’s what we’re doing,”

In preparing for that project, which will be set in a lab environment, it got Prather’s wheels turning toward the usefulness of a lab setting—and looking forward to incorporating that more into her projects perhaps through GPS’s Laboratory on International Law and Regulation.