Keeping ahead of the quantitative curve 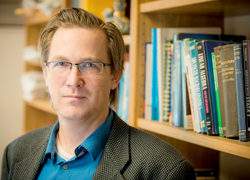 It’s hard to believe Information and Communications Technology (ICT) was once hardly a part of Craig McIntosh’s research vocabulary.

Here’s how the professor at the UC San Diego School of Global Policy and Strategy (GPS) explains in numbers his ongoing project in Uganda that is revolutionizing how farmers sell grain:

100,000=number of text messages sent per month as part of the research trial

The project aims to get farmers the best bang for their buck by quelling the lopsided flows of information on prices and other intermediaries in the supply chain of African agricultural markets. In partnership with Makerere University in Uganda and UC Berkeley, McIntosh is working on a project deploying a digital food-trading platform to allow farmers to contract directly with major buyers.

Needless to say, econometrics and ICT now threads together not only this project but much of McIntosh’s research and teaching at GPS.

A growing focus on ICT

“My career basically has been timed in that I was being trained at this flowering of using experimentation in clinical trials, pushing randomized experiments into the analysis of social policy,” said McIntosh, adding it started when he was a graduate student at UC Berkeley.

And, now as a development economist, he said there’s no better place than UC San Diego and GPS for him to continue this approach.

“UC San Diego has become one of the best development research groups in the world,” he said. “If you’re somebody who cares about policy issues and you want to be working across disciplines, UC San Diego is an extraordinarily good institution in this space right now.”

For more perspective, he pointed to the university’s undertakings in ICT in developing countries, particularly its bursts of research on projects involving mobile phones in rural countries (sound familiar?).

Noting there’s roughly 90 percent household-level mobile phone penetration even in rural areas across much of Africa, McIntosh explained: “It’s essentially the first time you’ve ever had, in the history of these countries, a functioning infrastructure you can use to communicate with and reach out to this massive, marginalized population. There’s a lot of this work going on at UC San Diego jointly with the Qualcomm Institute.”

For instance, GPS’s Policy Design and Evaluation Lab (PDEL)—of which McIntosh is co-director—helped support a project by UC San Diego Professors Jennifer Burney and Claire Adida that in partnership with the Qualcomm Institute implements a mobile money-based payment and budgeting system for secondary school fees in West Africa.

On an individual level, McIntosh recently concluded an ICT-related project regarding the 2014 South African elections. It involved the creation of a mobile phone platform to get citizens engaged in the political process through volunteering at polling stations or reporting election violence and misconduct, as a few examples. The platform resulted in almost 100,000 registered users and a wealth of experimental observation which soon will be put into a paper.

Then there’s his aforementioned project in Uganda that, empirically, seeks to answer to what extent information is an obstacle to making grain markets work more efficient.

And while the professor has had his hands in many projects in Africa, his research isn’t exclusive to the continent. He said being at GPS has allowed him to delve into Central America, conducting field evaluations in countries such as Guatemala and, of course, Mexico.

“I’ve really enjoyed being able to work in that binational space, especially to have colleagues right across the border,” McIntosh said.

As well as geographically expanding his research, McIntosh also has added a few awards to his name since joining GPS 15 years ago. He is a five-time winner of the School’s Outstanding Faculty Teaching Award.

Which brings to question, why do students like McIntosh so much?

Quantitative tools as a must

“I don’t know if I’m the right person to answer that,” McIntosh said, laughing. “The thing that’s more exciting than anything else is when you have students who have never liked math and didn’t want to do quantitative work. Yet, if you teach them the quantitative tools well enough, they start to realize, ‘This is actually the most practical way I can train myself to achieve this thing I’m interested in.’”

To that end, McIntosh has been a leader in building the School’s quantitative-centric curriculum, which he describes as a “two-year escalator.”

“There’s now this buffet of classes we’ve tagged as being technical skills courses,” McIntosh explained, noting those can be topped off with the School’s PDEL or quantitative certificate.

“We’ve built out the statistical toolkit, and now we’re trying to build toolkits in this big data-oriented set of computer-driven spaces,” McIntosh said.

“People who come here with a passion to achieve a certain kind of social change, this is how you do it. That’s the goal, and that’s what I try to do with my teaching,” he said, perhaps unknowingly answering his worthiness of those teaching awards.