Justice can be beautiful

In its San Diego film premiere, THE JUDGE celebrates stunning perseverance and bravery for women in Islamic law 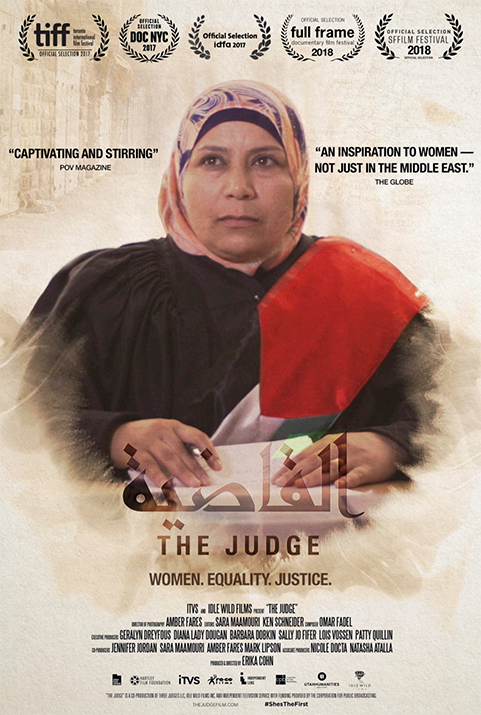 At the UC San Diego School of Global Policy and Strategy (GPS), we are rooted in exploring global issues of conflict and cooperation. On Feb. 6, 2019, the school’s Laboratory on International Law and Regulation (ILAR) hosted a critical dialogue, set at the crux between law, tradition, culture and faith.

Overcoming thousands of years of tradition, THE JUDGE is a unique and timely documentary about Judge Kholoud Al-Faqih, the first woman to be appointed to the Middle East’s Shari’a (Islamic law) courts and her tireless fight for justice.

After the film screening, executive producer and Peabody Award winner Ambassador Diana Lady Dougan welcomed a panelist of changemakers and judicial visionaries, all inspired by Haloud’s vision in their own work.

“A lot of issues in the film are human issues, the fundamental values on human rights,” said Dougan. “We wanted the film to surface different views about women’s roles in society and get people in touch with their raw feelings.”

“We do indeed need a social revolution.”

For many women in Palestine, they do not know their rights. The film hopes to demystify Shari’a law, which is practiced differently based on traditions and culture. While there is no one size fits all, Dougan hopes the film will educate all parties in the judicial system.

In Palestine, civil courts hear criminal cases while Shari’a courts are centered on family cases. In its history, there have been no women present, until Judge Kholoud. In the film, we see her not only as a judge but also as a mother, wife and neighbor. Valuing relationships within her community, it is obvious she acts as both a role model and community organizer.

“Like the film subject, we are a collection of rabble-rousers,” said ILAR Co-director and Professor Emilie Hafner-Burton. “We are committed scholars interested in innovation around social policy, development and ways to solve many of the world’s most pressing issues all through research, teaching and service.”

In Palestine, traditions are so strong, they can overrule the actual law. Acting as a role model for other judges, the film details her commitment to justice not only for women but for all people. Since the film’s inception, there are now four judges working in the field.

During the film screening we learn that Judge Kholoud’s court appeals were taken away. When they rescinded her cases, it also took a part of her soul she shared. Unlike common law practice in the U.S., the courts wanted to prosecute her with no judicial immunity towards her decisions.

“She is brave and she is extraordinary. I see these topics around the world. She worked harder, she worked smarter and had a vision,” said Ninth Circuit Court of Appeals Judge Margaret McKeown, who presented during the panel.

Another panelist, Dr. Rebecca Reichmann Tavares, Interim Executive Coordinator for UN Secretary General’s Every Woman Every Child Initiative, shared her own on the ground experience in Palestine and echoed the film’s push for justice.

“If you can see it, you can be it. There are now more and more women appointed as judges, and there are plural legal systems all over the world,” said Reichman Tavares. “We need to think about how we can integrate the formal and informal systems globally.”

Framing Shari’a law versus religion for the audience was Imam Taha Hassane, director for the Islamic Center of San Diego. For Muslims, he explained they deal with families and social bases according to faith. Judge Kholoud’s appointment was not only historic but embodied so many aspects of interfaith and cross-cultural collaboration – far beyond Islam.

“She is a hero. Haloud is a real fighter,” said Hassane. “She is a great role model for women, not just in Palestine but all over the world.”

The film excels at inspiring the human connection. By removing the curtain, the documentary breaks through the walls of tradition and starts the conversation. In demystifying Shari’a law, it is clear that there is no one size fits all in the fight for freedom.

For showings near you or to purchase the film, please visit THE JUDGE website.