Before tossing on their caps and gowns for commencement on June 18, select students from the UC San Diego School of Global Policy and Strategy (GPS) — or, as Acting Dean Gordon Hanson more casually calls them, “rock stars” — received an advance pat on the back for their achievements during the 2016-17 school year.

“The students we are honoring here today enrich the environment for faculty, staff and students at GPS,” Hanson explained at GPS’s annual awards luncheon on May 12 at the UC San Diego Faculty Club. “They have helped make our program stronger and better. Thank you for making these years so special.” 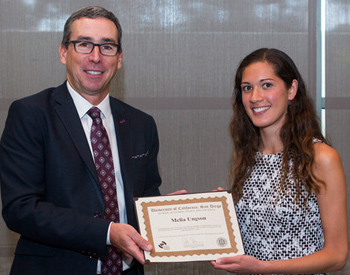 The latter, bestowed in memory of Ayal Margalith who passed away while a student at the School, recognizes an MIA candidate who has shown leadership, excellence and devotion to the GPS student body and community.

Eli Margalith, Ayal Margalith’s father, returned to campus for the sixth consecutive year to confer the award. In doing so, he underscored to the student award winners and attending faculty and staff: “You guys are made of a different kind of human. It’s the same kind of human as Ayal. Go out and make the world a better place.”

For already making her positive mark on the world, Sarah Vella, 2017 MIA candidate, received the Joseph Grunwald Award. In reminiscence of Professor Joseph Grunwald, the award is given to a student for an exemplary passion and dedication to social justice in the Americas.

In addition to being active in the nonprofit Border Angels and creating the Bridges to Education Program, Vella also has worked with the U.S. State Department to design and implement the Passport Project, which helps U.S. citizen children of undocumented parents living in the U.S. or of deported or returnee parents living in Mexico to obtain their passports.

“Professor Grunwald, whom I had the honor to know personally, would be very pleased with our selection of Sarah Vella for this award,” said Professor Richard Feinberg, presenting to Vella.

Aside from taking home this award for the seventh time, McIntosh also bestowed the Econometrics Prize to Camila Gomes, 2017 MIA candidate.

Another handpicked honoree by the GPS faculty was Richard (Rick) Ferrera, 2017 MIA candidate, who won the Ruth Adams Award for his paper, “Battery-Based Energy Storage in the PJM Interconnection.” 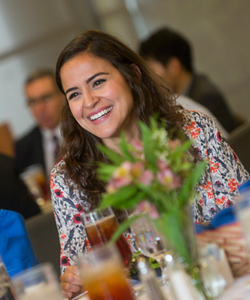 “When we were first given this assignment, we thought it would take a long time,” Professor Barbara F. Walter mused about reviewing students’ submitted papers with Professor Stephan Haggard. “It didn’t. It took a long time to read the papers. It took us no time at all to decide who the winner would be.”

Other awards were peer-nominated, including the MAS-IA Peer Award to Silvino Silvino and Mary Halloran, both 2017 MAS-IA candidates. And, the class of 2018 bestowed the Doming Liu Award — honoring the alumna’s willingness and desire to build community at GPS  — to Andrew Kincare, 2018 MIA candidate.

“Through her sincere kindness and care for classmates, Dani brought us together as a family,” 2017 MIA candidate Youngsun Kwon said on behalf of the class, and concluded on a forward-looking note: “We look forward to hearing your remarks on June 18.”