As the School marks a milestone in conferring its first degrees as GPS, Assistant Secretary of State Tom Malinowski advises graduates on how to achieve their own 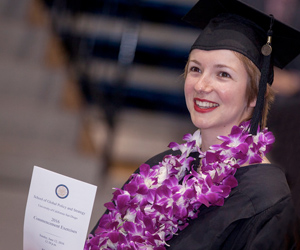 While graduates across UC San Diego marked relatively the same rites of passage during commencement weekend June 11-12, students from the School of Global Policy and Strategy (GPS) relished an added significance of becoming alumni: They are the first cohort to graduate from the School under its new name.

“We started at the School of International Relations and Pacific Studies and are the first GPS graduating class,” recognized Amandine Berro, MIA ’16, the student commencement speaker. “Today is a great time to remember what we have achieved.”

Lightheartedly recounting she and her classmates’ fear of being cold called in class, searching for misplaced commas in Stata code and bearing the arctic temperatures of the computer lab, Berro said: “We came so far, and it was not an easy ride. (But) I am glad I shared it with you all.”

As part of its 28th commencement ceremony on June 12, GPS bestowed 145 degrees, including seven MPIAs—the final conferral of the degree, as it transitioned in name to the MIA. Associate Dean Roger Bohn and Assistant Professor Jen Burney conducting the hooding of the graduates, with roughly 800 students, faculty, staff and guests in attendance at the RIMAC arena.

Offering a brief breakdown of GPS’s class of 2016, Dean Peter Cowhey tallied that 54 graduates had served as graduate student researchers, 10 were military officers, three were professionals from foreign ministries and students had interned in 17 countries, among other statistics. 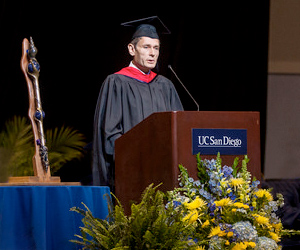 Having interned at the U.S. State Departments’ Bureau of Democracy, Human Rights and Labor, Candace Silva-Martin, MIA ’16, received a humorous shout out from Tom Malinowski as a kick off to his commencement address.

The Assistant Secretary of State for Democracy, Human Rights and Labor emphasized for students to embark into their careers with patience and courage to enable positive change.

“If you dwell on what you can’t yet do, you can become paralyzed,” Malinowski said. “You’ve got to focus on what you can do. You have to be willing to be inconsistent and do something for someone even if you can’t do everything for everyone. People you help will then help others. The small victories will build to bigger ones, and big victories will come.”

In divulging his path to human rights, Malinowski also detailed some recent travels to Burma—commonly called Myanmar—to attend a funeral that laid to rest a girl 28 years after her actual death, alluding that “it can take years to resolve an unjust situation.” 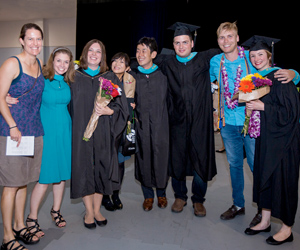 “If you can face the world as it is and still believe you can make it better—two steps forward for every one and half steps back—then you’ll be far less likely to ever get cynical or discouraged. … You’ll say, ‘This is what we were put on this world to fight against.’”

Building off of these encouragements, Cowhey charged graduates with one final assignment.

“As a School, we say that we seek to graduate leaders,” he explained. “But what does leadership imply in a world where there is such widespread uncertainty about how to understand the current state of affairs?

Here is my answer. We don’t have the luxury of trying to duplicate golden moments of the 20th century. This class will only be true leaders if they reimagine the global goals and strategies that will propel the 21st century.”

View a photo gallery from the ceremony.