Fighting wildfires with web based imagery 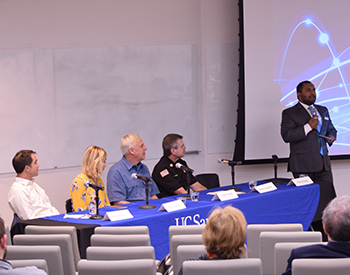 As the fourth roundtable installment of the UC San Diego School of Global Policy and Strategy’s (GPS) Science Policy Fellows Program, the panelists connected the role of technology and image analysis with one of California’s greatest natural threats, wildfires. The event was held in collaboration with Scripps Institution of Oceanography’s Master of Advanced Studies program in Climate Science and Policy.

Wildfires are on the rise noted Fire Chief Fennessy, highlighting the trends in his 40 years in the service including citing San Diego as the “birthplace” of modern day firefighting. In terms of California statistics, 2017 saw 6,762 fires spanning over half a million acres. With 10 of the top 20 deadliest fires happening in the last decade, the problem has never been more salient, with so many residents living in the wildland urban interface.

“Wildland fires are our greatest risk in California. They are killing the most people in our county,” said Fennessy. “With temperatures rising and no real end in sight, we need to model where fires will spread.”

One tool at the Fire Chief’s disposal is WIFIRE, an integrated system for wildfire analysis spearheaded by Altintas. Featured in the National Science Foundation's online magazine, "Science Nation," the tool uses satellite data and real-time remote sensor data to provide a scalable method to monitor weather patterns. During the Napa County wildfires, the site received over 300,000 visitors due to word of mouth, offering a projection of where the fire was going and how it was spreading, all in real time.

“These new tools can offer real-time environmental conditions, offering more calculated evacuations,” said Fennessy. “Instead of spreading my firefighters out to a whole area, we can specifically target a narrower area.”

Incorporating data from UC San Diego’s High Performance Wireless Research and Education network (HPWREN), this real-time camera project functions as a collaborative, Internet-connected cyberinfrastructure, run by the San Diego Supercomputer Center and the Scripps Institution of Oceanography’s Institute of Geophysics and Planetary Physics. Vernon has worked to install and monitor the AlertSDGE cameras, built on top of the HPWREN network.

“I’ve been on the other side.  My house was one of the first levels gone during the 2003 Cedar fire,” said Vernon. “There was no notification, you saw a big plume of smoke and a wildfire coming at you.”

Since updates aren’t always broadcasted on the news, HPWREN makes images available in real time and this can assist residents in making informed decisions about early evacuation. Creating images every minute, the project builds animations in an effort to understand wildfire characteristics. The technology is advancing the ability for firefighters to not only look at the fire, but locate the fire and assist in an evacuation plan.

Altintas and Vernon have worked alongside project collaborators at SDG&E, CAL FIRE and the U.S. Forest Service to assist in the prediction of a wildfire’s rate of spread. WIFIRE hopes to be used by government agencies in the future to save lives and property during wildfire events, test the effectiveness of response and evacuation scenarios before they occur, and assess the effectiveness of high-density sensor networks in improving fire and weather predictions. 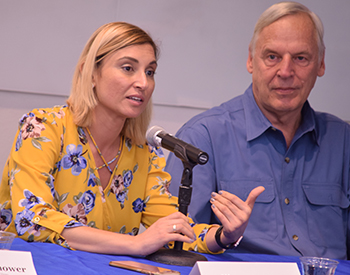 “WIFIRE is really a pipe dream turned into reality,” said Altintas. “We have been able to predict where the fire going, how is it spreading and at what speed every 15 minutes.”

This is key in areas of concern by offering a clearer window of opportunity to inform residents of evacuations. In terms of planning for housing, Boomhower envisions development density as being the largest predictor of protecting homes and the largest cost for firefighters. With homes built in high risk areas, there is a huge financial burden on both the state and federal government.

“Unlike a lot of other natural disasters, the management is very fractionated for fire with lots of jurisdictions overlapping or dividing responsibilities,” said Boomhower. “It is extremely dependent on where you are in the country, as well as rural versus urban.”

When discussing zoning and building codes, Fennessy cites that these technologies can help developers plan ahead. Before building, they have to clear blueprints with the local fire marshal to ensure compliance with CAL FIRE and statewide fire hazard severity zone maps. If they cannot provide safe fire protection, the development is denied, with the fire department having final authority. As we experience greater and larger fires, modeling is key.

“This technology is just remarkable,” said Fennessy of WIFIRE. “By understanding where the fires will go, we can roll out a focused evacuation in real-time environmental conditions.”