Dust can settle on a lot of things over 20 years, but as Jeff Rector ’97 can attest, quantitative training from the UC San Diego School of Global Policy and Strategy (GPS) is not one of them.

“This is the most exciting thing I’ve done in my career, and it took 20 years to be able to say that.” — Jeff Rector ’97

It’s probably why the statistic that two out of three Sub-Saharan Africans lack access to electricity startled him so.

“That’s roughly 600 million people in Sub-Saharan Africa,” Rector enlightened.  “A large portion of them can be most economically or sustainably served with clean energy microgrids. We don’t need some technological breakthrough for this to work.  Renewable energy is finally cheaper than conventional energy. We know that. So why aren’t these being built? They should be. 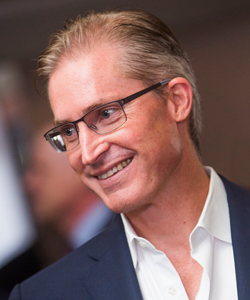 “Lack of affordable financing is the primary barrier to deployment of this technology — and throughout my career I have learned the techniques that can be applied to facilitate the flow of cheaper debt and equity finance into frontier markets.  I can see a solution to this complex problem that few others can and even fewer will act on.  In a way, I feel responsibility to do something.”

And so he has, launching Millennium Microgrid this spring.

Running on Rector’s decades-honed adeptness in advising on development and financing for energy and other infrastructure projects, the company develops decentralized clean energy microgrids in Sub-Saharan Africa and arranges long-term debt and equity financing for them.

Big-picture impacts of Millennium Microgrid aside, the company also serves as a memento to Rector’s commitments to GPS and his education.

“This is the most exciting thing I’ve done in my career, and it took 20 years to be able to say that,” Rector disclosed. “It’s a reminder of why I went to GPS …  and why I see GPS as part of the solution.”

Putting an education to use

Since attending the School, Rector has held a steady gaze on international development opportunities, including via positions at Bechtel Corp., Asian Development Bank and, later, as a project finance attorney. Still today, he serves as special counsel at Sheppard, Mullin, Richter & Hampton LLP, amid growing investments in Millennium Microgrid.

Entering the law, Rector clarified, was not a means to jump ship from his GPS education but rather a “continued desire to make use of it.”

In fact, Rector added, lawyering in international project finance and in areas of renewable energy — including at Orrick, Herrington & Sutcliffe LLP and Milbank, Tweed, Hadley & McCloy LLP — allowed him to recall many lessons from the School.

“The law is not the only way you form a binding agreement,” Rector explained. “Some of the tricks taught at GPS relate to that. I feel I have an insight that most other lawyers, certainly lawyers of comparable experience, really don’t have.”

“Now is a very interesting and auspicious time for an initiative like this … changing the world by leveraging private capital, which is abundant, and focusing on new technologies for important social purposes,” said Victor, who also is a formal adviser for Millennium Microgrid. “What Jeff is trying to do is a beautiful combination of technology, smart schemes for finance and development.”

For Feydeau, the project served as a real-world plunge into the challenges faced by developing economies and by social entrepreneurs like Rector trying to stave them.

“This project came with a great deal of responsibility. We needed to accommodate Jeff’s preferences and also provide a final product that was reflective of GPS’s academic quality,” Feydeau said. “It was a perfect culmination of our environmental policy training at GPS.”

“What Jeff is trying to do is a beautiful combination of technology, smart schemes for finance and development.” — Professor David Victor

Kristen Hamel, MIA ’17, also had a hand in the assignment.

“I am planning on building my career in rural electrification in developing countries, so it was a great experience to deep dive into the many political, business and developmental challenges these markets face,” Hamel said, and added of working with Rector: “Having the guidance and support of an alum, who knew the skills and background that we had, allowed us to best utilize the resources of our team to make this project a success for both Millennium Microgrid and our team.”

Extending experiential learning opportunities to his alma mater, as well as connecting with students and alumni is no far stretch for Rector, however. 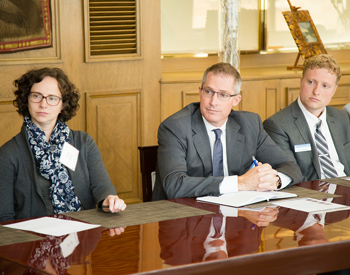 Tapped into the School’s alumni network as an active member of its International Advisory Board and Alumni Board — and former Alumni Board president — Rector also often returns to campus and occasionally travels abroad to support the School’s research centers, including attending the Center for U.S.-Mexican Studies’ flagship program Mexico Moving Forward in Mexico City last year.

Staying connected to these extents, Rector noted, has re-inspired him to put his GPS education to use in ways he had imagined while a student at the School — that is by combatting climate change. Now, as CEO of Millennium Microgrid, he’s doing that head-on and then some by also aiding Sub-Saharan Africans who are most at risk by its effects.

“Right now, my mission is energy access for all,” Rector vowed, resurrecting an enthusiasm he had out of the gates of GPS two decades ago. “I have 13 years to do it as part of Sustainable Development Goal 7.”

And, reinforcing an appreciation for the School’s involvement in Millennium Microgrid, Rector divulged one other mission for the years to come.

“I hope that in the near future I’ll be able to hire someone from GPS,” he said, and noted further, “I can already think of people I want to ask.”