Enhancing diversity for a better future

Everyone has a role to play in improving the lives of U.S. citizens and the global community. From Nov. 30-Dec. 2, 31 students made their voices heard on campus for a series of skill building and networking, hosted by the UC San Diego School of Global Policy and Strategy (GPS). Daring and deliberately interdisciplinary, the program was for future changemakers.

Co-sponsored by the Public Policy and International Affairs Program (PPIA), the weekend is designed to expose underrepresented students to the myriad ways they can make a meaningful difference in the world through a career in public service. We heard the voices of those stepped in education, immigration, environment and LGBTQ issues. At the core, was the intersectionality of passion, purpose and policy. 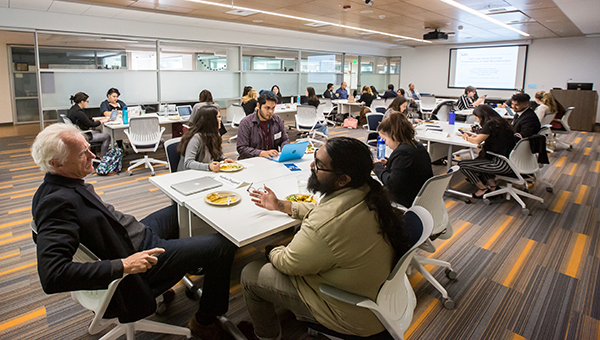 “In this room, I see people who are already engaged and active. I want to applaud you for thinking about a career in public service,” said Professor Zoltan Hajnal, who gave the opening remarks. “Giving back and making a difference makes you feel pretty good and is a great way to spend the rest of your life.”

Students had a chance to learn about different options for graduate school, fellowships and how to make a difference in their own backyards, while marrying public policy, science and technology to solve today’s most pressing challenges for equity and inclusion.

“As GPS celebrates its 30th anniversary, we are focusing on impact; the impact of our scholars and our students as they share their insights with the world. For this year’s offering, we selected the theme of Local Leadership in a Global World,” said Wendy Hunter Barker, assistant dean of GPS and lead administrator of the weekend. “Everyone has a role to play in shaping tomorrow, and after spending the weekend with these bright and talented students, my sense of optimism is renewed.”

Diversity and social justice will always be relevant and no more so than 2019. At the center of the weekend were presentations from the U.S. Government Accountability Office (GAO), a government watch-dog dedicated to inclusion. Focusing on accountability, integrity and reliability, they offered a call to action for each participant to encourage racial and ethnic diversity at the local, state and federal levels.

“Whatever the issue at hand, we must understand that there is some inequity, the have and have nots,” said GAO’s Josh Diosomito who facilitated Friday’s discussion. “This goes beyond the binary aspects of race. We must recognize the larger global context but also understand what is going on in our local communities.” 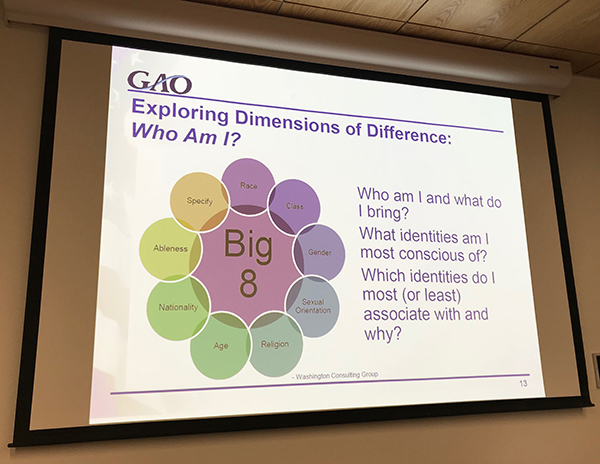 Exploring dimensions of difference, students were encouraged to see beyond what was comfortable, highlighting eight principals that define personal identity, from race to age to gender and nationality. Committed to inclusive excellence, the weekend led the path towards making leadership roles in public service salient and achievable, working for both the global context and the greater good.

“It’s the value of these differences that motivate me to advocate for diversity, particularly non-traditional student representation, in the public sector because diversity equates to visibility and empowerment for others,” said Jeremiah Azurin, a Harvard University student who is studying computer science. “It behooves employers to acknowledge how non-traditional backgrounds contribute to the field the way we do in the classroom: different perspectives for complex, universal problems that, like us, fit no box or mold.”

For Azurin, he is a leader who wears two hats. As both a long-distance learning student and a non-traditional undergraduate, Azurin has many times felt a stranger at his own university, struggling with integration and acculturation. It was these limitations that inspired him to advocate and mentor for other non-traditional students. When asked his favorite part of the weekend, it was the camaraderie and inclusive nature of the program — something he feels he hasn’t received in his undergraduate program.

“We talked ‘til the late hours about our own passions and interests, career objectives, and personal histories that have shaped us in ways that I don’t normally get,” said Azurin. “I’m incredibly sad that it’s over. I truly cherished the authenticity and vigor of each and every one of the conference participants.”

And it’s never too early to start networking. Promoting experiential skill building and team camaraderie, each changemaker got a chance to network and interact with faculty, alumni, policy experts and key public officials, culminating in a group project that showcased their local leadership in a global world. 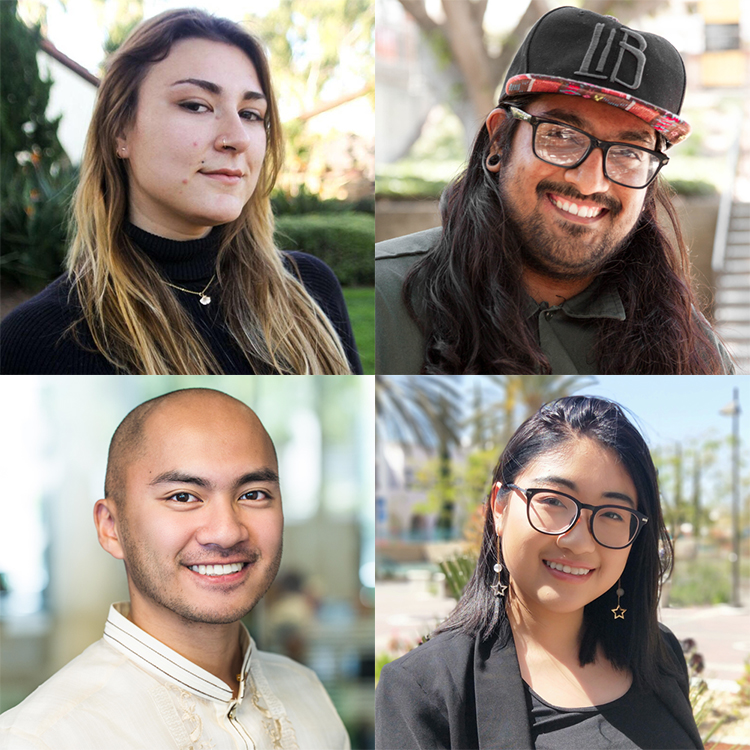 “Being a leader means you shouldn’t just watch things happen, you should be an integral piece of the process,” said Nicolette Greco, a UCLA student who hopes to fight for intersectional feminism and women’s rights. “We need to combat the lack of diversity in the Senate, the House and in more ubiquitous places such as judges on every court level, along with other positions of power like police forces and CEO’s of powerful companies.”

Pushing for the rights of the chronically homeless and affordable housing, Mahindra Kumar, a Long Beach State University student echoes the need for a change in social policies. As an immigrant, he believes immigration policy can become much more dynamic and responsive if it is informed by immigrants' experiences to the U.S., reflecting the growth of diversity within the nation.

“Far too long has policy been unresponsive to the needs of marginalized peoples,” said Kumar. “I left the weekend with greater hope that each of us will engage policies in a much more critical manner as we find ourselves in positions of power. The network that was developed amongst us is one that gives me motivation.”

As an international student at UC San Diego, Xiangdi Zhang echoed the ability to meet like-minded individuals as a great part of the program. As both a dancer and advocate for arts education, she is the president of Movement Exchange, teaching free weekly dance lessons to children and elders from underserved local communities. She also initiated a project called “Dance By the Border” whose mission is to connect humanities on both sides of the U.S.-Mexican border through movement.

“It is experiences like these — working with the community, mobilizing students and connecting local organizations and institutions — I was able to identify my passion for public service,” said Zhang. “My leadership is shown through my ability to connect people across countries and culture with art. These experiences trained me to think globally and act locally.”

For an overview of the weekend, visit our photo gallery here.