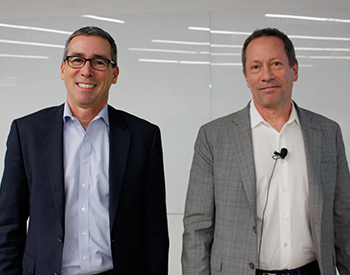 From one writer to the next, the rare opportunity to interview a top journalist in your field is an incredible experience in itself.

Sitting down between meetings at the UC San Diego School of Global Policy and Strategy (GPS), Eduardo Porter and I discussed his long journalism career, which spans over two decades as a financial reporter for Notimex, a Mexican news agency, The Wall Street Journal and more than 14 years at The New York Times.

Center on Global Transformation Director Gordon Hanson was thrilled to welcome Porter to GPS, a journalist and thought leader not afraid to challenge economists on the technical details of their analysis. Porter is tackling the biggest issues of the day – income inequality, tax reform and the future of entitlement programs.

“Through his regular columns in The New York Times, Eduardo Porter is an influential and authoritative voice on how economics shapes our world and how thoughtful public policy can improve the human condition,” said Hanson.

Porter is a true global citizen, growing up in the U.S., Mexico Belgium. With a graduate degree in quantum fields and fundamental forces, his story is not your typical journalistic career path.

During his residency from Jan. 22-26, he traded snowy New York for sunny San Diego to participate in the center’s Pacific Leadership Fellowship (PLF), including delivering a public talk on “Curbing Inequality.”

Read below as Porter shares his impressions about the fellowship, including how it inspired his own future columns ideas.

What led you to GPS as a CGT Fellow and what has been your overall impression so far?

EP: I’ve known Professor Hanson for a long time. He’s helped me with a bunch of stories on trade and immigration. The invitation to GPS sounded like a wonderful opportunity. It is a fantastic place. It’s data heavy and crunchy, attempting to meld the insights from the life and biological sciences with a social science perspective. It seems like a very interesting approach to the world and a great combination of many fields of expertise.

You have built an impressive journalism career. What advice do you have to any budding journalists in the field of economics and policy?

EP: I followed such a serendipitous road, from doing physics to trying to write movies to journalism. I honestly sort of landed in this field. My suggestion…do study journalism, study economics, political science, history and public policy. I find that subject matter expertise is really useful. You can learn to write along the way. You have to have a passion for writing, to be sure. Journalism is changing rapidly though and it is becoming extremely data-driven. Learning how to work with data has become very valuable.

You graduated with a degree in physics from the Universidad Nacional Autónoma de México. Please tell me how you transitioned into becoming an expert on market incomes and economics.

EP: I was doing a master’s degree in London and realized I had a choice to do a Ph.D. or leave the scene. I decided to leave. After a short stint in moviemaking, a position opened at Notimex, a Mexican news agency, in Mexico City. I covered foreign banks and I learned to write about the stock market, which I really had no idea about. It was very much learning on the go. After a year they sent me to Japan. At the time, there were only three Latin American journalists in Japan. It gave me a lot of space to write what I wanted. They then sent me to London, where I wrote a lot about the interest of European banks into Mexico. I then went to Brazil to help launch a magazine that was partly owned by Dow Jones and that led me to The Wall Street Journal. There I wrote about Latinos in the U.S., from marketing stories to pieces about immigration. By total chance, a colleague from my days in Brazil got a job at The New York Times and recommended me there to write about economics. It’s now been 14 years. The connections have been crazy. 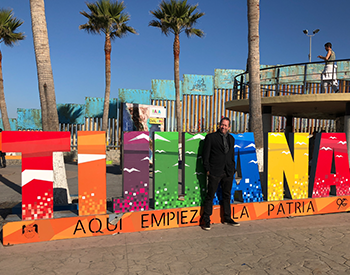 What’s been on the agenda during your stay?

EP: I’ve really enjoyed talking to the students in Professor Francisco Garfias’s class on economic policy in Latin America. It’s always very stimulating talking to young students. It’s also been great catching up with some of the professors I already knew – like David Victor and Gordon and seeing what they are working on. I’m always searching for ideas for my column. It’s not easy to have an idea a week! I’ve also had some great conversations with Professor Gordon McCord about his work on the impacts of climate change on health outcomes. That could lead to some future columns. For me, this has been so valuable.

During your residency, you focus on trade, immigration and their effect on the U.S. economy. What do you hope to learn?

EP: One of my main interests is what will happen if our trade arrangements with Mexico. I find it very hard to write about as we do not know what the Trump administration will do. This region is particularly vulnerable since integration is very close. I was talking to people at the Center for U.S.-Mexican Studies yesterday and they have some interesting models using the idea of pulling out of NAFTA as a demand shock. This could offer some insight into the effect of ending NAFTA. Also, having Scripps Institute of Oceanography down the road, I hope to learn more about their research on climate change. Climate change is an enormous economic problem. I want to find new ways to write about this topic. The work done here modeling impacts could be very fruitful for me.

Do you have any parting career advice for students?

EP: Travel. Have fun. Take risks. Once you hit my age, taking risks is more difficult. This is the age for risk-taking. It yields new experiences and insights which will help your work down the line. Go crazy, go somewhere else, take a job that looks odd but interesting!