Connecting the dots on the U.S.-Japan relationship

As part of her Pacific Leadership Fellowship, Yoriko Kawaguchi rediscovered the strength of and predicted what’s in store for U.S.-Japan relations 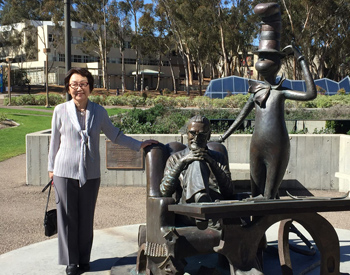 Despite career pinnacles as Japan’s minister for foreign affairs (2002-04) and minister of the environment (2000-02), Yoriko Kawaguchi is unabashed that she still has much to learn.

“It’s important to expose yourself to whatever comes to you, especially when you’re young,” she said. “You get experience by exposing yourself to something. With each experience, you are placing a new dot to influence your future.”

To directly quote Jobs’s remarks from Stanford University’s commencement in 2005: “You can’t connect the dots looking forward. You can only connect them looking backward.”

Not yet at the end of her career, thus not near looking backward, Kawaguchi seized the opportunity to ink a new dot for herself as a Pacific Leadership Fellow at the UC San Diego School of Global Policy and Strategy (GPS)’s Center on Global Transformation (CGT) from Feb. 9-20.

“I’ve been fully occupied,” Kawaguchi shared at a sit-down during her residency, detailing her meetings with professors at GPS, luncheons and lectures with students, as well as tours to local companies and even a trip south of the border to Tijuana, Mexico.

A tour of Qualcomm, she noted, left a lasting impression on her. It cemented the ways in which San Diego and Japan are alike, she said, also recognizing their clout in biotech, manufacturing and as military communities. 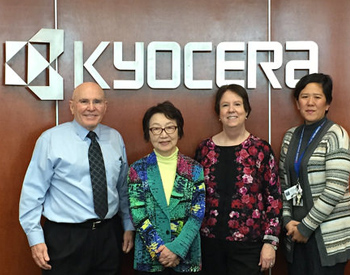 “I saw the future, gathering a sense of where society could be going,” Kawaguchi said of her visit to the telecommunications behemoth. “It also reminded me how similar Japan and San Diego are in that we are both future-oriented and interested in moving forward. That’s the commonality.”

It’s an impression she also re-affirmed in interacting with students at the School.

“GPS students have a strong sense of the outside world,” she said, adding more broadly: “People talk about America becoming more domestic, more inward-looking. But I always have thought of America as having a good sense of balance. … During this visit, I found that core strength has not changed. The strength of America is here. It’s not gone.”

This theme, the strength of America, Kawaguchi emphasized, too, in a public talk on Feb. 15.

The event was held in partnership with World Trade Center San Diego and the Japan Forum for Innovation and Technology at GPS, with sponsorship from Bank of America. It was a part of the San Diego Global Forum, which facilitates open dialogues about how San Diego is engaged in shaping solutions for our interconnected world.

"We (Japan and the U.S.) have achieved so much together, and we will in the future,” she said. “Our alliance is strong and will be strong."

Still, there are many areas the two nations can improve on together, Kawaguchi said. She pointed to the energy sector as one of them and advancing trade and investments as another to help not only the countries but their regions.

Only time, Kawaguchi reminded, will tell how actions by the new administration—much like dots—will connect the countries and their futures moving forward.