A preview of what to expect from Professor Victor Shih in his Destination GPS presentations in New York City and Washington, D.C. 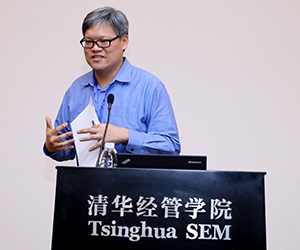 If you want to know what’s on Victor Shih’s mind, do as thousands of others do: Follow him on Twitter.

Since joining the social media platform in 2009, the associate professor at the UC San Diego School of Global Policy and Strategy (GPS) has ignited quite the fan base with his frank and witty two cents on China’s politics, economy and finance that he is most renown for. He has nearly 12,000 followers.

“As my following grew, I found it is a good way to vent (sometimes sarcastically) on various issues,” Shih said. “An easy way to build yourself up as a public intellectual is to comment quick on areas you know a lot about.”

But he’s not always remarking on news articles regarding China’s financial ups and, more recently, downs. He also retweeted a reminder of his “The Role of the Chinese Government in Preventing a Global Financial Crisis” talk in New York City on March 22 and in Washington, D.C., on March 24 as part of the School’s Destination GPS series.

To that end, East Coast alumni and friends of the School can get a taste of Shih’s candor in person and learn more about how he garnered such expertise in the first place.

It started with his adviser as a Ph.D. candidate at Harvard University, Roderick MacFarquhar, Leroy B. Williams Research Professor of History and Political Science.

An interest in Chinese elites

“I knew if I wrote a dissertation on elite politics, he would just demolish it, really,” Shih recalled. “I couldn’t say anything better than him.”

But as a Ph.D. candidate in government, Shih had to do a bit of brushing up on finance, including taking rudimentary classes on monetary policies and causes of inflations, to make his points. You can find them now in his book, “Factions and Finance in China: Elite Conflict and Inflation (2007),” and soon in his new book, with the working title, “Coalitions of the Weak: Mao’s and Deng’s Power Strategy.”

“It’s been a good niche because I think very few people think about the connections,” he said.

In addition to his published works, Shih also has pioneered the quantitative studies of the Chinese elite. As an associate professor at Northwestern University, he created what is arguably the largest database on biographical information of elites in China. It’s a project that found a turning point after he joined GPS in 2012, receiving with UC San Diego Professor of Mathematics David Meyer a grant from the Department of Defense to expand the database by thousands more individuals and update it through 2015.

“Anyone interested in networks and the effect of political networks on political outcomes can use this database,” Shih said.

For instance, the theory that bureaucrats who attended a certain university make better policy can be tested by referencing the database, Shih exampled.

“We have made a huge amount of progress,” he said, adding the ease of cross-campus collaborations at UC San Diego such as with the Department of Mathematics has been a big factor.

Shih also serves on several dissertation committees for the Department of Political Science.

“UC San Diego has always had and continues to have a very strong reputation in political science and China studies—two areas for which I have a great deal of passion,” he said, noting the quality of Ph.D. and graduate students the university recruits were a part of his motive to join GPS four years ago. 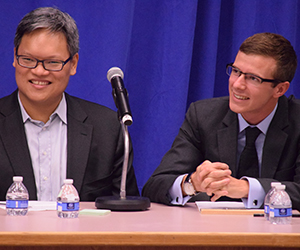 In fact, Shih tagged his participation in the student-led 2014 China Focus Debate, which he won against Professor Barry Naughton, as “one of the greatest things I did at GPS.” He defended with two student debaters that the Chinese economy would see a severe crisis within five years.

“Graduate students at GPS are a lot more knowledgeable and focused on China,” Shih said. “I firmly believe GPS is the best place in the world to get a master’s degree on China studies.”

His favorite course to teach at the School, he shared, is “Financing the Chinese Economic Miracle.”

The intimate class is somewhat inspired from his real-world experience working for The Carlyle Group in between his professorships at Northwestern and GPS.

“I went off and, in a sense, got it out of my system,” he said of the job. “I always wandered what it was like.”

Needless to say, the 14-hour days “chained to a desk” weren’t for Shih.

“I learned the grass isn’t always greener on the other side,” he said. “Being a professor at GPS is one of the best jobs you can have in the world. I learned a great deal about the financial industry, and I’m grateful to be able to pass that financial knowledge onto students now.”

And as part of his Destination GPS participation, alumni also will have the opportunity to absorb that knowledge, specifically Shih’s take on how China dug itself into a financial hole and the challenges for the government to thwart capital flight.

“In reality my talk will be pretty doom and gloom,” he said. “I look forward to people who will challenge me. I’m always interested in other perspectives.”