As CGT’s first-ever research fellow, Terra Lawson-Remer is bridging research and the real world in the classroom and creating new connections outside of it

It’s been two decades since Terra Lawson-Remer has resided in her hometown of San Diego. She was last a student at La Jolla High School, preparing to leave the nest to pursue a bachelor’s degree in ethics, politics and economics at Yale University. 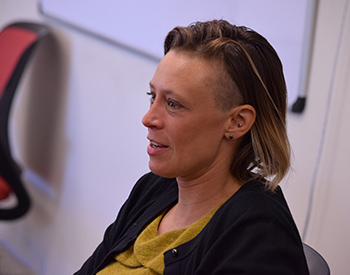 In the 20 years that have since ensued, she not only earned that B.A., but also has the acronyms “J.D., Ph.D.” following her name and the title “founder” tagged to it — these of which merely skim the surface of her resume.

And now, with a new appointment at the UC San Diego School of Global Policy and Strategy’s (GPS) Center on Global Transformation (CGT), she’s back to her stomping grounds.

“It wasn’t so much my goal to get back here, but it was an expectation it would happen,” said Lawson-Remer, who previously served as a fellow at the Council on Foreign Relations and, before that, a senior adviser at the U.S. Department of the Treasury during the first Obama administration. In addition, Lawson-Remer was once a scholar at the U.N. World Institute for Development Economics Research and a nonresident fellow in the Global Economy and Development program at Brookings Institution.

“I’ve had the opportunity to live in great places and do great work. Now, I’m excited to contribute that insight to my hometown university. I hope the work I bring is a bit of a bridge between research and the real world.”

As CGT’s first-ever research fellow, Lawson-Remer’s role is meant to traverse precisely that.

In teaching GPS’s spring quarter course, Managing Mission-Driven Organizations, Lawson-Remer has pulled into the classroom her practical experience as the founder and managing partner of Catalyst, a global research, strategy and legal firm focusing on evidence-based approaches to social and environmental justice.

“Essentially, the firm translates hard analytics into social change,” Lawson-Remer said, and explained it was born out of her commitment to address determinants and consequences of global justice, equity and sustainability.

At CGT, which she joined in February, she has had the opportunity to expand her work, including on a project at the intersection of artificial intelligence, transformations in the nature of work, and global economic policy.

Even as eyeing artificial intelligence is new for Lawson-Remer, the angle at which she’s observing the technology is not.

Through this project and others, Lawson-Remer also has worked on data analysis with GPS students outside of the classroom. 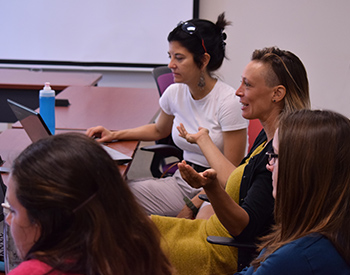 Steve Koller, 2017 MIA candidate, is one of them, having conducted with Lawson-Remer original geospatial analysis on key voter patterns in San Diego and Orange County.

“While a complex project, Terra’s vision and organizational leadership have turned abstract ideas into actionable results,” Koller said, and added: “In most GPS classes, we hone our quantitative analysis skills and learn to develop effective public policy. However, after working with Terra, I’ve gained insight into the important leadership qualities required to effect transformative change from within a mission-driven organization.”

Bearing in mind her experience as a former assistant professor at the New School for Social Research — where she taught undergraduate and graduate students — Lawson-Remer described GPS students as being ahead of the curve in quantitative analysis.

“GPS students are being prepared to be real leaders,” she said. “They’re extraordinary.”

Beyond collaborating with students, Lawson-Remer noted she’s also looking forward to learning from and forging new connections with other members of CGT and researchers around UC San Diego.

“There are a lot of people here with similar work. I’m hopeful this will unlock collaborations with them,” she said, and contemplated, “That’s what I think is exciting about CGT. It creates possibilities for collaboration.”