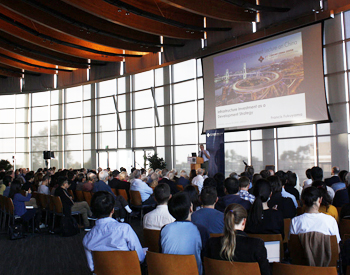 Held Jan. 29, the 2018 Sokwanlok Distinguish Lecture Series was presented by Francis Fukuyama, who has written widely on issues in development and international politics. His research has been fundamental in Chinese policy, reaching deep into the body of collective wisdom in 21st century politics.

Hosted by the 21st Century China Center at the UC San Diego School of Global Policy and Strategy (GPS), the standing room only event honors the ongoing contributions of center founders Marion and Kwan So who established this series as an avenue to foster greater U.S. and China understanding by bringing international thought leaders to campus.

“He is a genuine public intellectual and somebody who reaches deep into the body of collective wisdom,” said Naughton. “He produces idea, thoughts and insights that can reach out to millions of people and give them a deeper and more sophisticated interpretation of public affairs.”

Discussing China’s model of state-led development, Fukuyama showcased how China over the years has engaged heavily on infrastructure investment, which is the base for the “One Belt, One Road” initiative — a development strategy proposed by the Chinese government that addresses connectivity and cooperation between Eurasian countries.

Unlike Western development funding, which has increasingly focused on issues like public health, good governance, anti-corruption and women’s empowerment, China’s domestic development has been fueled by high levels of infrastructure investment such as building roads, bridges and airports.

“No country has ever gotten rich by just investing in public health,” said Fukuyama. “Infrastructure is desperately needed – people want roads, electricity and this is not being met by Western agencies.”

Fukuyama offers three factors in the growth of the Chinese infrastructure investment. First, in China, there is an authoritarian advantage, resulting in the need for less consultation, allowing projects to be completed more rapidly. Second, geopolitical positioning has become a main driver for these projects, with foreign policy goals weighing in the investment decision. And third, within domestic industrial policy there is a strong need to maintain spending to keep Chinese people employed.

“One of the mysteries is how these decisions and tradeoffs are being made,” said Fukuyama. “China’s banks are not designed as loss leaders or aid institutions.”

Looking at over 20 case studies in his research, Fukuyama examines several studies where U.S. and China were both building and competing in a region, exploring commercial (Western) vs. relational (Chinese) justification for project selection.

In the case of Jamaica, the highway project aimed to connect the capital with the main tourism areas, we see that the Chinese wanted to build influence in the Caribbean.

“China knew they were going to lose money but it was a way of showing their flag in an area that was traditionally part of the American sphere of influence,” said Fukuyama. “They compensated to stay in the game.” 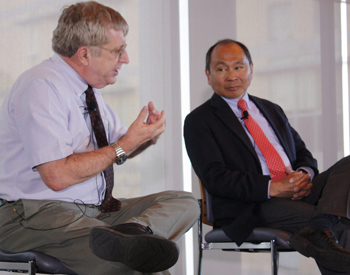 By contrast, Fukuyama highlighted a Western project, Power Africa, a U.S. government-led partnership under the Obama administration. The initiative indicated that African states did not want health programs as much as they wanted electricity, a single item repeatedly stressed, with a goal of 20,000 megawatts of new clean power generation by 2020.

Unlike the Chinese, which have invested $60-70 billion dollars in other projects in Sub-Saharan Africa in the past decade, the U.S. invested $0 in Power Africa, even with the backing of President Obama. They became dependent on mobilizing private sector resources to fund the project.

“These kinds of issues in the U.S. are extremely hard to coordinate, especially with 12 agencies required to make it work,” said Fukuyama. “The U.S. has not delivered on any projects, it’s quite a contrast to China.”

Rather than looking at the frameworks of approaches as either transactional (Western) or relational (Eastern), Fukuyama examines rates of return. Because the Chinese overemphasize the positive and undervalue negative, their approach tends to work less well outside of China.

Whereas internal rates of return estimate future cash flows after interest, salary and cost of construction, infrastructure development rarely captures an external rate of return, or whether benefits flow to the broader society.

Fukuyama concludes that neither side’s approach to infrastructure investment is the gold standard. The West has too many safeguards, which leads to project lags and increased costs. China lays out too much capital, with limited awareness of financial risk. With tensions created by both approaches, Fukuyama encourages changing behaviors.

“This is not a well-oiled machine. Our failure to do infrastructure projects is a microcosm of our larger democratic political problem,” said Fukuyama. “I’ve coined the term ‘vetocracy’ or rule by veto. In the American political system, we have overdone it.”

View photos and watch a recording of the lecture. Plus, tune into the 21st Century China Center's China 21 podcast episode featuring Fukuyama.