Before the pomp and circumstance plays at graduation, the UC San Diego School of Global Policy and Strategy (GPS) got to highlight some of its best and brightest students and their accomplishments during the 2017-18 academic year.

“Each year we take great pride in recognizing the best ambassadors of our school through our student awards program,” said Dean Peter Cowhey.  “Next month we will celebrate commencement. This ceremony not only marks the next step in your lives, but it welcomes you into our alumni ranks.” 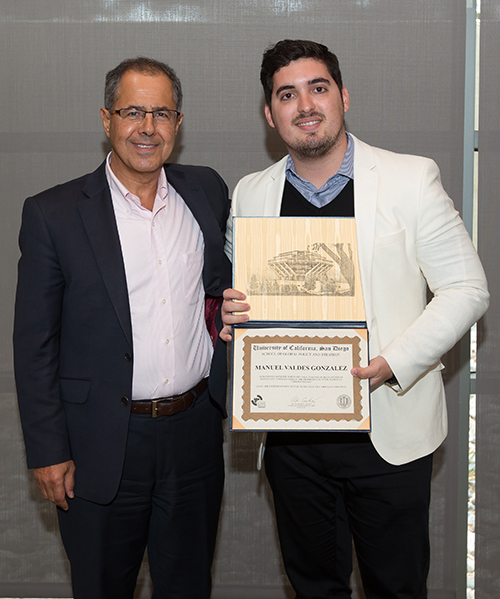 Promoting a richer understanding of Inter-American understanding, 2018 MIA candidate Manuel Valdes Gonzalez was awarded the Joseph Grunwald Award, honoring the late Professor Grunwald and his practical compassion throughout the Americas.

The Ayal Margalith award, in memory of Ayal Margalith who passed away while attending GPS, is given to a student who has shown leadership, excellence and devotion to the student body. Eli Margalith, Ayal’s father, returned to campus for the seventh year to confer the award to 2018 MIA candidate Andrew Kincare.

“Where some students stay in their niche, he always has an open heart and mind to all of his peers,” said Victoria Holden, 2018 MIA candidate and former GO GPS president. “I am personally better for having worked with him and can’t wait to see what Andrew does next.”

At GPS, language acquisition is considered a vital part of global citizenship. This year, 2018 MIA candidate Duangruetai “Pui” Surasakjinda was awarded the Language Achievement award. Despite the fact that Pui had met her language requirement, she decided to take Bahasa Indonesia from scratch, dedicated to continued learning.

“Alec won this award because of his intellectual entrepreneurialism in recognizing this opportunity, because of the rigor with which he conducted the statistical analysis, and the clarity with which he was able to tie the whole story together into a cleanly calculated internal rate of return,” said McIntosh.

Other noteworthy faculty members included Professor Stephen Haggard, who received the Faculty Recognition Award for being a dedicated mentor and engaged lecturer, with a passion for teaching and research.

Another handpicked honoree by the GPS faculty was Mateo Villamizar Chaparro who won the Ruth Awards Award for his paper “Sustainable Tourism in Costa Rica” that examined a contemporary policy problem on which little research yet exists.

“This is a well-written, well-researched and analyzed paper on an important contemporary topic, applied to a country that is likely to be at the forefront of attempts to make tourism more eco-friendly. Thank you for your great work Mateo,” said Professor Lauren Prather.

Each year, GPS administers a poll asking students to vote for their commencement speaker. This year, 2018 MIA candidate Gabi Rubio’s classmates received that honor. Founder of the new Public Policy Series at GPS, Rubio helped fundraise around $700 for refugee shelter supplies in Tijuana last year — just one example of her philanthropic work on behalf of the school.

“Gabi goes beyond talking or posting about current issues, she organizes events, applies her coursework and connects GPS to its community,” said classmate Holden. “We look forward to hearing her remarks on June 17!”

Other awards were also peer nominated, including the MAS-IA Peer Award to 2018 MAS-IA candidate Kevin Edes and Dean’s Teaching Award to 2018 MIA Mateo Villamizar Chaparro. The class of 2018 bestowed the Doming Liu Award to 2019 MIA candidate Elizabeth Linn, who exemplifies the qualities that so endeared Doming to us: her spirit, wisdom, exuberance, warmth and sense of leadership.

“Here is a toast to all of you. From the bottom of our hearts, thank you for making these years so special, and for making this place great,” said Cowhey. “Here’s to your accomplishments and to all your future success!”