In line with GPS’s mission for campus-wide collaborations, the Baja Project is working with SIO to develop a new marine research lab 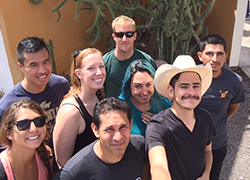 This summer, four co-directors of the Baja Project student group at the UC San Diego School of Global Policy and Strategy (GPS) were joined by two members of Scripps Institute of Oceanography (SIO) to make the quarterly trek to El Barril, a Mexican fishing village on the Sea of Cortez.

The Baja Project recruited SIO Assistant Professor and Research Scientist Octavio Aburto and Sabrina Mashburn, a master’s candidate at SIO, to join the trip, which spanned Sept. 13-16. The partnership between GPS and SIO has potential to result in a new marine research lab in El Barril—a vision originating from Baja Project Benefactor James Jameson.

“Like the current strategic collaborations going on at UC San Diego, the Baja Project provides an opportunity to bring together student specialists in economic development and in the oceans to solve problems,” said Jameson, who also serves on the SIO Director’s Council and GPS International Advisory Board. “The intersection of both the disciplines at GPS and SIO enhance the possibilities of solving some of the most intractable problems at El Barril.”

Established in 2003, the Baja Project is GPS’s student-led group catalyzing developmental change in El Barril. It travels quarterly to the village to implement projects that improve residents’ quality of life such as in terms of education, health, infrastructure and now, due in part to SIO, conservation.

“This is a good time for collaboration because it’s when the scope of GPS is expanding,” said Baja Project Co-director Henrique Barbosa, Master of International Affairs (MIA) candidate 2016.  “One of the cornerstones of the School is collaborating more in the STEM fields campus-wide. We’re doing that with SIO.”

The collaboration grew legs toward the end of spring quarter, when Barbosa alongside fellow co-directors—Amanda Darlington, Jonathan Liu and Alicia Shull—met with a cohort of SIO students wrestling with choosing their capstone projects and encouraged them to work alongside the Baja Project on their capstones.

“It’s not something that’s only useful for us,” Barbosa explained. “It also is beneficial for them. It’s double-sided.”

Mashburn was the first student to take the bait.

Barbosa explained that GPS students travel to El Barril with development mindset, whereas SIO students like Mashburn offer some perspective on conservation, which is important for growing the small fishing community.

“With Sabrina on board, we were more able to develop ideas and projects of how to use the environment to develop the community,” Barbosa said.

In addition to chipping away at ongoing projects regarding windmills and a community garden, with an SIO presence in September, the Baja Project also began brainstorming ways to improve fishing parameters for different species of sharks and how to fund the maintenance and sustainability of a water filtration plant in El Barril.

Foremost, Aburto led the effort of vetting community interest for a marine lab in the community that could support research activities at SIO and beyond in the Gulf of California amid supporting local jobs.

With more than 10 years of study on the Gulf of California, Aburto said El Barril is a prime location for a such a lab, especially in the wake of how “in many places around the world, we have overexploited our resources (such as fishing).”

Jameson added: “The oceans have historically provided El Barril’s economic sustenance, and the fisheries are currently being depleted. The village needs alternate sources of income and ever higher levels of education for its youth.”

To that end, Aburto envisions that relationships between researchers and the community could lead to new initiatives within the Baja Project such as implementing sustainable aquaculture practices or identifying opportunities for ecotourism.

Of the educational aspect of SIO and GPS working hand-in-hand and on the ground in El Barril, Aburtor added: “We need to do more to build these kind of projects with interdisciplinary collaborations. It’s important everything we propose to solve human and economic situations take into account the sustainability of the environment.”

Although the notion for the lab is in it’s very beginning stages, with Aburto merely tasked to write a proposal for its construction, Barbosa is nothing short of optimistic about the student group continuing to partner with SIO moving forward.

“It’s a very exciting time to be in Baja Project,” he said.

Student recruitment for the Baja Project begins fall quarter, with the first trip of the 2015-2016 school year taking place in December.