Artificial Intelligence and the future of society

A global two-day conference launched a new program with scholars from Europe and Asia to explore the upcoming digital disruption and the research agenda needed to address the critical questions for society, business and policymaking 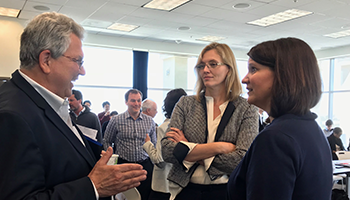 learning and Artificial Intelligence (AI) are about to become the new reality, based on recent dramatic advances in computing power and big data algorithms.

Yet, these advances raise a number of critical issues: What will “Society 5.0” look like, how will it shape human behavior, and how will humans shape the nascent technology settings? It is unlikely that governments will be able to write regulation for technologies that are just emerging, so how will we agree on guidelines and standards that ensure the preservation of and human dignity, such that society will embrace and accept the disruption?

On April 27 and 28, the Japan Forum for Innovation and Technology (JFIT) at the UC San Diego School of Global Policy and Strategy (GPS) hosted an international group of 50 scholars and practitioners from the U.S., Germany Japan. In partnership with the Max Planck Institute for Innovation and Competition, the German Institute for Japan Studies and the University of Konstanz, the conference examined the role of social science research in the ongoing discourse on the future of production, business, work regulation.

Opening remarks by JFIT Director Ulrike Schaede set the stage for discussions centered on the ongoing changes associated with AI, Internet of Things (IoT), industry 4.0 and society 5.0 – all with a global comparison.

“The digital disruption is here. How will AI and IoT affect our lives? This is a perfect time for social scientist and leaders in the field to talk about what the ethical, moral, societal and political implications are, both for today and in the future,” said Schaede.

Panels approached eight different aspects in which the digital disruption will create a need for global strategies in policymaking for security and regulation; autonomous systems and self-driving vehicles; blockchain and cryptocurrencies; human relations, including trust, privacy and ethics; work patterns and jobs; as well as corporate and  national strategies for technology and research leadership.

Dean Peter Cowhey kicked off the first panel on the future of cyberspace, with the admonition that lawmakers will always be playing catch-up. Using smart cars as an example, he observed that as we move to automated vehicles, the winners will be those that possess the most data in real time, because cars are now ecosystems. While the owner may not know it, a Mercedes now shares the data it collects with Apple, whereas BMW has built its own closed system. Who will win this race, and what will be the industry standards? He noted that the long-term principles we agree upon in privacy and security for AI will be the key.

High-profile examples of AI autonomous vehicles such as drones and self-driving cars, smart homes, medical diagnosis and search engines like Google. Lately, online assistants like Apple's Siri and Amazon's Alexa, and cryptocurrencies such as bitcoin, have joined this group. This brings further challenges regarding privacy and regulation. For example, should cryptocurrencies be considered money or be regulated as securities? 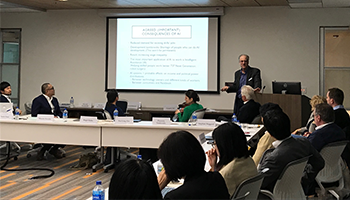 Where does all of this leave people? Will we be displaced? Become servants to machines? Change our behavior and intonation after we work next to a robot for a day at the office? Nathalie Le Ngoc, ’03, associate general counsel at Salesforce.org reinforced Cowhey’s statement: it will be the private sector that will dictate the conditions of work, not the government (at least in the U.S., Europe Japan), and it is up to companies like Salesforce to lead the way to ensure equal pay, morals, ethics and diversification in the workplace.

On the business side, the challenge will be how large firms can address the disruption. Are U.S. companies “ambidextrous” enough to continue their profitability in existing markets and technologies, and enter new business segments that will ensure their future market leadership?

After two days of stimulating panel discussions, we learned that AI is here, the time is now, and the social sciences have a pressing need to build a research agenda that can help address these issues for the future of society. Policymakers will soon ask for insights and research on how people, businesses and markets will be affected and need to be both enabled and protected. It’s high time for social scientists around the world to start looking at these questions in great detail, in global comparison, and in fashion.

View the full agenda and meet the speaker here.

View photos from the conference.