­­Alumnae sustain a friendship for the books 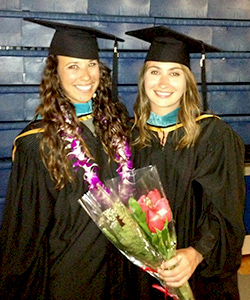 It was friendship at first icebreaker for Lauren DeMates, MPIA ’13, and Rosaly Byrd, MPIA ’13.

And so they have.

Moreover, the common interests that brought them together on their first day of school at the UC San Diego School of Global Policy and Strategy (GPS)—that is, a book and a fondness for sustainability—is not only fueling their rapport but turning profits today.

The duo is slated to release its first book, “Sustainability Made Simple: Small Changes for Big Impact,” in March 2017. It is somewhat of a spin-off of their successful blog, The Sustainability Co-op.

“We’ve both always been interested in sustainability and in different ways,” said Byrd, a research and communications associate at the U.N. Development Programme’s World Centre for Sustainable Development in Rio de Janeiro. “Writing is a way we feel we can make the most impact.”

Byrd and DeMates, a research associate in the Sustainable Federal Operations Group at the Lawrence Berkeley National Lab in San Francisco, got the blog off the ground in September 2013, shortly after graduating from the GPS.

Around the time, DeMates was transitioning from her role as an associate at Malk Sustainability Partners in La Jolla, Calif., to a new job as a responsible investment associate at ESG Analytics in New York City. Byrd was on her first research stint in Brazil, working as a field researcher for Vital Wave Consulting in Sau Paulo.

Fresh out of GPS’s international environmental policy track and instilled, per the School’s quantitative curriculum, to speculate about the research they read, DeMates and Byrd noticed a common thread in the generic “how-to” or “tips and tricks” articles on sustainability they often came across: The articles cited no academic research or reasoning to back it up.

So, they created a forum that would and launched The Sustainability Co-op.

For the most part, the blog is written for the general public, DeMates and Byrd explained, and is contributed to about every two weeks. 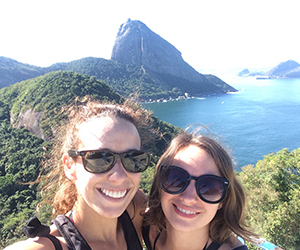 “Everything we write about is research-based,” DeMates said, and noted it’s a change-up from how they might write in their careers or in graduate school where their audiences are more in-tune to sustainability. “It’s just writing for a different audience. We’ve never written in a simple way.”

Byrd added, “We don’t want to corner ourselves off to people who only know things about sustainability. Some of our content is lists, and then there’s other material that is more complicated, where we break big topics down.”

Since its launch, The Sustainability Co-op has housed more than 200 posts and seen almost 40,000 visitors from 152 countries—DeMates keeps track of these stats in a spreadsheet, which she tags as a testament to GPS’s emphasis on quantitative analysis.

“Everything has happened organically so far,” Byrd recollected. “The book fell also into our lap.”

Or, more specifically, the initial email from their publisher fell into DeMate’s inbox, where at first glance she disregarded it as junk mail.

Expanding a brand, staying close to the School

“I thought it was spam at first,” DeMates said, laughing—eventually, she ran her now-editor’s name through a search engine to confirm her identity.

After a promising phone call with their publishing house, Rowman & Littlefield, and a thorough proposal produced, DeMates and Byrd had the green light to be published. They just had to write the book, the chore they’ve been up to for the past nine months.

“Sustainability Made Simple” is two parts, Byrd explained. Written for a general audience, the first half of the book offers an introduction to sustainability and actors such as nonprofits and parts of the government that are practicing it well. The second half empowers individuals to have a hand in sustainability, providing tips for everyday life. Much like their blog, the book is grounded in case studies and interwoven with research citations.

Officially, they submitted the manuscript together from Byrd’s place in Rio on June 10. This date and the 10 days prior to it, when they were wrapping up the text, was only the third time they had been in the same room since graduation.

“Where would we be without Google Docs," Byrd jested, alluding to how her and DeMates’s partnership has endured some distance since graduation.

Then rethinking, she said, not much could have separated them—as well as other friendships with classmates—since GPS.

“We have so many amazing memories from our time there,” she said “It’s something we always want to keep.”

DeMates chimed in with gratitude for the School’s encouragement in her and Byrd’s professional endeavors.

“Seeing the support and interest in what we’re doing, I always want to have that,” DeMates said, and offered, as means of giving back, the opportunity for students and alumni to contribute to the blog.

“It’s a good opportunity for individuals working on new research, even if it’s just a paper for a new class. Just getting your information out there and simplifying the message is really powerful. At least, that’s how it worked for us.”

Interested in contributing to The Sustainability Co-op? Email thesustainabilitycooperative@gmail.com for more information.