A salute to our soldiers

In honor of Veterans Day, we pay homage to GPS’s current and former military members 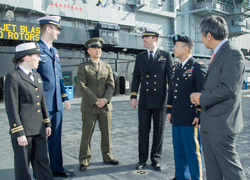 When Nicholas Matcheck, MPIA ’07, sees “Veterans Day” marked on a calendar, he automatically mulls over his grandfather and his father’s tenures in WWII and the Air Force, respectively.

All the while, he’s dressed in a Navy uniform, one adorned with badges for a decade’s worth of service as an aviator, including deployments to the Middle East and Central America.

“I don’t think of it as a holiday for me or my cohorts,” Matcheck said on the phone from Daniel K. Inouye Asia-Pacific Center for Security Studies (DKI APCSS) in Honolulu, where he is an active-duty operations officer and military professor. “We just get the day off work.”

This year, in celebration of the holiday, the UC San Diego School of Global Policy and Strategy (GPS) is doing more than enjoying that day off. We connected with a pool of GPS’s military members—current and former students—to put a face to the School’s heroes who are recognized on Nov. 11.

What we learned? They’re driven. They’re humble. And they’re proud to not only be a part of the armed forces, but also to share that experience with the GPS community.

“GPS seeks to be the home of leaders who value tackling solutions for our global society in the 21st century through rigorous analysis and a passion for entrepreneurial problem-solving,” Dean Peter Cowhey explained. “We’ve been fortunate to welcome U.S. military members and veterans who embody this through and through. As such, we value them equally so. And we thank them for their heroism and contributions to our country as we look to celebrate this Veterans Day.”

Here are their stories.

For Timothy Scheidler, MAS-IA ’15, the choice to serve his country was immanent.

The Navy lieutenant comes from a family of service members. His grandfather was stationed in Japan following V-J Day, and his uncle was a part of HAL-3 in Vietnam, “the most decorated unit in aviation history.” His brother is a Marine.

“They blazed a trail for me, and I always wanted to live up to their legacy,” said Scheidler, now having served 10 years, including currently as a helicopter pilot in San Diego.

As if his tenure and rank weren’t enough to live up to that legacy, Scheidler also earned the Politico-Military Fellowship, awarded annually to select Navy officers to attend a graduate program at elite international relations schools.

“I was simply lucky that one of the best institutions in the country happens to also be in my adopted hometown,” Scheidler said. “GPS taught me to challenge accepted theory, see where it works well and understand where it does not. It also taught me to appreciate nuance and gray areas that exists in the policy world.”

Dennis Mello, MPIA ’13, also had the support of his family—as well as an ROTC scholarship in his undergraduate studies at UC Berkeley—as motive to serve as a civil engineering officer from 2001 to 2005, including a deployment to the United Arab Emirates. His father is an Air Force veteran.

Currently a program officer for the Women Empowered Initiative at Project Concern International in San Diego, Mello explains the course of events that ensued from his time in the Air Force much like a domino effect.

“Getting a chance to live and work abroad shaped all sorts of things after I got out of the Air Force,” he said. “That short time I had abroad led to my wife and I eventually joining the Peace Corps (as an education volunteer in Vanuatu), which led to my interest in travel and working in international relations. That led me to GPS.”

It’s a scenario that turned out similarly successful to David Resilien, MAS-IA ’11. He describes his 10 years of active-duty service in the Marine Corps, including deployments to Iraq, Japan, Korea, Egypt, Guam and Australia, as “the best decision I ever made.”

Now in the Marine Corps Reserve and working at Marine Corps Air Station Miramar in San Diego, Resilien enlisted right out of high school. It was 1996. He’d never even drafted a resume.

“I didn’t feel prepared for college at that time,” Resilien explained. “Of course, I did end up going to school.”

Graduate school, however, was not on his radar until the tail end of his undergraduate studies in political science at UC San Diego. Resilien was serving part time in the Marines but with a growing interest in international relations, particularly in Venezuela. GPS had just launched a new degree program, the MAS-IA.

“I never had considered graduate school because I always was older than my classmates, and I thought I just needed to start a career,” he said. “But the MAS-IA is more for people with a career. I had a career in the Marine Corps, and so it was the best fit for me.”

GPS’s executive master's degree program, the MAS-IA focuses on how public policy, management and international interactions shape strategic decision-making. Students must have a minimum of five years of professional work and relevant international experience. They have the option to enroll full time or part time.

Being a part of the first cohort, Resilien could speak to the rigor of the program, especially during his first quarter when he was working as a full-time Marine and student.

“I kind of look at it as being in boot camp,” he said. “The curriculum was demanding, the professors where demanding, but all in a good way. You have to do a lot of critical thinking. You have to think 10 steps ahead.”

Janisse Martinez knows the rigor well, too, as a MAS-IA candidate 2017. Luckily, her experience in the Coast Guard, combined with an innate self-discipline, has groomed her into a go-getter.

“The biggest thing is I can manage the workload,” Martinez said. “I have two kids; I work; I work on a nonprofit. The military has given me the structure to handle all of these competing priorities.”

A commissioned officer in the Coast Guard Reserves, Martinez also works full time as an energy efficiency technical services manager at San Diego Gas & Electric (SDG&E). She has been promoted four times in her six years with the company.

Martinez credits her four years of active-duty service (from 2004 to 2009), including a deployment to address the BP oil spill in 2010, for her interest in the environmental sector and what led her to GPS.

“When I first started, I didn’t know what was going to happen,” she said of enlisting in 2004, after working as a mechanical engineer. “I ended up loving it. It’s definitely a part of who I am.”

Eventually moving every two years on active duty weighed on Martinez and her family. She decided to put down roots in San Diego. Now in the Reserves, she manages a team of about 10 engineers and works in the preventions division, observing the military’s effects on the environment.

Ultimately, she hopes her MAS-IA degree will prepare her to move to SDG&E’s international division.

“I have a broad perspective of the political environments in different parts of the world,” Martinez said. “GPS gives me a better perspective on how business is developed, including on the microeconomics we deal with in the Coast Guard and how it translates to macroeconomics.”

Justin Liberatore, MAS-IA ’14, already is seeing such a payoff from his degree.  As an active-duty Latin American foreign area officer with the Army, Liberatore was drawn to the School specifically for its focus on the Pacific.

“I was looking at schools on the West Coast, which is where I was living at the time,” recalls Liberatore, now stationed in Arlington, Va. “It was recommended there was a great program at GPS. It was a great fit.”

Foremost, Libertatore said the program taught him how to efficiently conduct research, honed his writings skills and enabled him to communicate ideas succinctly.

Other military members such as Matcheck also have found their GPS degrees aligning directly with their careers today. As a military professor at DKI APCSS, Matcheck teaches a course on Latin America and the Asia-Pacific, focusing on economics and trade. He also keeps close ties with the School as the head of Honolulu alumni club and occasionally working alongside GPS student interns at DKI APCSS.

Now as he approaches the end of his service contract in April, Matcheck is planning where to put his degree, combined with his military experience, to use next. His sights are on a career in public policy—but after doing some international travel with his wife and hopefully working in international development for a nonprofit. It’s a sound start to his transition from a military member to a civilian, Matcheck explained, as it continues to fulfill why he joined the military to begin with.

“I was focused on more of the adventure and the international travel side that a military career would be,” Matcheck said. “It was a way to have kind of an exciting, atypical career path and gain a new experience.”

Still Matcheck said there’s a slight angst that comes with leaving the only career he’s know for 10 years and his military comrades.

It’s a worry shared by many veterans, explained Resilien, who addresses exactly this at Marine Corps Community Services.

As a personal and professional development adviser, Resilien is responsible for preparing soldiers to transition out of the military and into a civilian life, including how to navigate the benefits of getting an education to pursue their desired careers. This even can entail coaching veterans on how to write a resume for the first time—just as he once had to be advised.

“Everything has prepared me for this position I’m in now,” Resilien said. “I know it can be a tough transition when leaving the military and deciding what to do with your life. I have been through that transition.”

To that end, Resilien said on his day off Nov. 11, he’ll be focusing on that kinship.

“It’s one day all of the service members can remember how the military made us a better person,” he said. “Life wasn’t always good in the military, but it did bond us.”