­­A day in the life of an MAS-IA student

In a Q&A complementing our Storify tour of a day in the life of Brian Foster, the 2016 MAS-IA candidate paints a picture of what attending GPS looks like for him

Positioned on top of Pangea Parking Structure, the preferred parking for the UC San Diego School of Global Policy and Strategy (GPS), Brian Foster puts the kickstand down on his blue Suzuki Marauder.

Despite the “block O” emblem on his helmet that represents his undergraduate alma mater, Foster could pass as what many consider a typical graduate student at UC San Diego. But like most of his fellow MAS-IA classmates, he isn’t.

“We come from many different disciplines and places,” Foster said of his cohort. “It really is one of those melting pots of people who earned their way in, and we all bring something to the table.”

Foster is a husband, father of two and captain in the U.S. Army. He has served as a field artillery officer in Iraq and Afghanistan, as well as a signal officer in the special operations community. His current mission? Get a degree, a regionally focused one. It’s all a part of his training to become a Foreign Area Officer (FAO), a position that in August will station he and his family in Beijing.

In complement to our Storify tour of a day in the life of Foster, we also asked him a couple of questions for more on what led him to the School and what the MAS-IA degree program entails today.

Was it always your intention to make a career out of serving in the military?

“Absolutely not. At every step, I’ve been kind of seeing the options laid out before me. I enlisted right out of high school, spent two years in the Reserves and then went to the Ohio State University for my B.S. in electrical and computer engineering, where I joined ROTC. They basically released me from duty obligations from the Reserves to allow me to train to be an officer. As my life changed—I got married and had two kids—I said, ‘This is what I want to do.’”

For those who don’t know, what does being an FAO mean?

“It’s very complex. Basically, you are a military diplomat. At the highest level, we are Army attachés and defense attachés. At the lowest level, we are intel analysts. We have military relations with foreign militaries based on our assigned region and language capabilities. It’s kind of a lengthy process. Before coming here, I went to the Defense Language Institute in Monterey, Calif. I learned Chinese there. After GPS, me and my family will go to Beijing for a year. I’ve never been to Asia. But based on my language aptitude, as tested by the Defense Language Aptitude Battery, I proved pretty dexterous in Mandarin Chinese. I’ll be taking classes at a university in China, too. I’m not sure where yet, but it’s a part of the requirement. I’ll be training and travelling as well, going to other countries in the area, just trying to figure out how the embassy and whole system works over there.”

What led you to GPS now?

“We need to get a regionally focused degree. Going through all my options, I wanted to balance my training objectives with my family goals. My wife Amy and I originally are from California, which made San Diego an attractive location. Truthfully, I had no idea the MAS-IA program really existed until I started digging for it. It was a pleasant surprise when I found GPS. This program and the cohort I’m in is amazing. Everybody holds each other to a really high standard and a high level of respect. I think everybody treats it like a full-time job, even if they are part-time MAS-IA candidates. And I tip my hat to those who are part-time. They take about two classes a night after having to excel in their occupation and then come here and excel academically.” 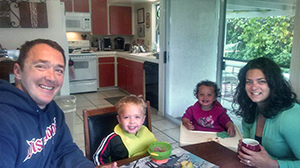 How do you strike a work-life balance?

“I’m a full-time student. I’m blessed in that situation to be able to focus fully on my studies. Amy, she’s basically doing everything at home. Any free time is totally devoted to her and my kids Greyson, who will be 3 in May, and Scarlet, who will be 2 in August. When I’m at GPS, I focus on getting as much work done as possible, so I have all the time when I’m at home to really focus on family. During that time, I try to be a dad that I can’t be the rest of the day.”

Has anything surprised you about the MAS-IA program?

“When I left Southern California 16 years ago, I was just a kid who wasn’t paying attention to things like foreign policy. I also wasn’t really one of those people who was interested in the ‘giants of academia,’ professors who are legends of their field, so to speak. I now realize there is a hidden pocket of them in San Diego. Consider Stephan Haggard, Victor Shih or Barry Naughton. It has been amazing learning from them. That was a surprise, but more of a surprise is I’m not drowning in the rigorous curriculum. I’m able to use experience, points of view and my own perspective to bring things to light. The same way I ask questions to people who work in nonprofits and try to get their perspective on things, those same people ask me about my military experience and how the Department of Defense works.”

Visit Storify to see a typical day in the life of Foster.