Travis Lindsay, 2017 MIA candidate, reflects on the ways in which his first year at GPS primed him for the accomplishments that followed, such as being published in The Diplomat

When in August South Korea and the U.S. assumed their annual military exercises in the face of tension with North Korea, national security players around the globe looked on with furrowed brows and twiddling thumbs.

Travis Lindsay, 2017 MIA candidate at the UC San Diego School of Global Policy and Strategy (GPS), was one of them.

Interning at the Korea Economic Institute (KEI) in Washington, D.C., at the time, he made good on having an outlet to put his ponderings to paper, so to speak.

“When I got to D.C., I realized I was at the frontier of Korean security policy. I knew the language, the big ideas, the contentious issues front and back.”

“Some superiors at my institute were not that gung ho about me writing about this topic because it's such a sensitive issue... and I have a critical view,” Lindsay explained of going beyond his assigned research projects and those basic intern tasks such as fetching coffee and event planning. “But I was persistent. And after lots of collaboration and back and forth I was able to get published and make my first foray into the broader policy conversation."

Outside the bounds of KEI, Lindsay also submitted an opine to The Diplomat, which was accepted and printed under the title “Why the U.S. Should Rethink Exercises with South Korea.” Two months later, he was published again in the magazine, authoring a piece urging reconsideration of U.S. sanctions toward the North Korean nuclear program.

“Writing and publishing on my own was a high point of my internship,” Lindsay recalled.

It’s also a milestone not all graduate students hit while in school. However, Lindsay partly credited his confidence gained in his first year at GPS for his ability to do so.

“You really come to respect all the passion, expertise and specialization everyone brings to the table. That may be the best thing about GPS.”

With a deep interest in security issues and in the interplay between China, Japan and North and South Korea, Lindsay said, GPS’s focus on the Asia Pacific served as a turning point for him to come to the School. He applied while living in Seoul, South Korea, where he worked as a teacher for three years after receiving his bachelor’s in political science from University of San Diego.

“When I was researching GPS, I saw some of the professors and thought, ‘This is a great fit for me,’” Lindsay said.

He pointed to Professor Stephan Haggard as an example.

“After taking Korean Security with Haggard in winter quarter, I thought I had just one perspective of how people discuss these issues,” Lindsay said. “When I got to D.C., I realized I was at the frontier of Korean security policy. I knew the language, the big ideas, the contentious issues front and back. I had the confidence and the ability to engage with experts and to enter and influence the broader policy conversation.” 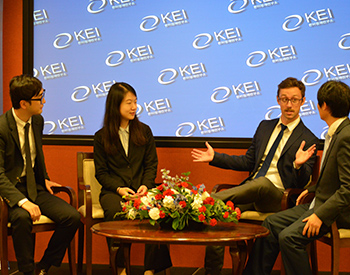 Moreover, Lindsay noted the School’s required Quantitative Methods courses were useful at KEI in analyzing trade data and having the ability to identify what’s invalid in an economic paper.

“As Professor Craig McIntosh says, ‘There’s a lot of (subpar) economic work out there and you have to be able to see through that,’” he explained. “Having the ability to be somewhat of a quantitative authority at KEI was also surprising.”

Now in his second year at the School, Lindsay continues to have his viewpoints voiced on pressing policy issues as a member of the Young Leaders Program at the Center for Strategic and International Studies (CSIS).

The Young Leaders Program aims to enhance cross-cultural opportunities for amateur scholars and foreign policy professionals to improve their policy analysis skills at early juncture in their careers, according to CSIS. It offers participants like Lindsay the opportunity to attend conferences and other meetings of their individual interest to build networks and observe the foreign policymaking process firsthand.

“With this program, CSIS is trying to actually give young professionals a seat at the table to share their ideas, both to learn from the experiences of thought leaders in their field and to try to bring fresher, younger ideas into the policy debate,” Lindsay said. “It’s an incredible opportunity.”

Gearing up for graduation in the spring, as well as searching for the first steppingstone toward his long-term goal of joining the National Security Council, Lindsay said these accomplishments outside of the School—albeit invaluable—merely complement the experiences he’s gained at the School.

“There's something exceptional about this pressure cooker of super motivated people,” he concluded. “You're working and learning together every day, building these strong bonds with everyone in the program. You really come to respect all the passion, expertise and specialization everyone brings to the table. That may be the best thing about GPS.”