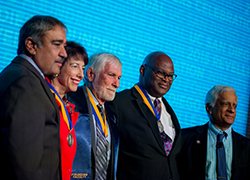 “The great American universities have a solemn duty of service to society, and Susan has been all of that both by her institution building here but also by her role in the external world,” GPS Dean Peter Cowhey said. “By being a go-to expert on China and the U.S.-China relationship she has elevated the stature certainly of this School. … She has at this moment chosen to become professor emeritus but not ride off into the sunset but instead to charge into the rising sun with her leadership full time of the 21st Century China program. For that, we are deeply grateful.”

In addition to the campus-level recognition, GPS hosted its own celebration of Shirk in the form of a panel discussion on “Are the U.S. and China Headed Toward a New Cold War” and an invitation-only appreciation dinner at Estancia La Jolla, attended by Shirk’s close colleagues, former students and family. (View a photo gallery here.)

Shirk was joined by Thomas Christensen, director of the China and the World Program at Princeton University, and Orville Schell, Arthur Ross Director of the Center on U.S.-China Relations at the Asia Society in New York, for the panel discussion, held 5:30 p.m. - 6:30 p.m. at the Institute of the Americas.

On the title of the event, Shirk began the talk with: “It’s something I lie awake at night worrying about. I’m worried about it because I see the relationship between the U.S. and China growing increasingly competitive—very different from the feeling we had when I was working in government from 1997-2000 (as a deputy assistant secretary of state for the Bill Clinton administration).”

Christensen reasoned “no, there’s not going to be a new cold war” by comparing the U.S.’s cold war with the Soviet Union. 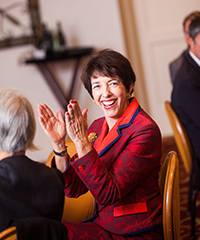 “We don’t have a zero-sum view of our relations with China like we did with USSR,” he said, and cautioned, “If China handles its relations with its neighbors as badly as the U.S. did in the late 19th century, we’re in for big trouble.”

Schell also offered his “not particularly optimistic” thoughts on the U.S.-China relationship, noting “China, particularly under Xi Jinping, has come to a different sort of interregnum where I don’t think they even aspire to getting where it was we all thought the world in general should go.”

He concluded, “There’s no choice but for everybody to put their shoulder to the wheel in every conceivable way to see if we can straighten this thing out before China possibly goes the way of Russia, (which) would be a very sorry conclusion.”

The scholars—and attendees in a Q&A portion of the event—also interwove in the discussion sentiments toward Shirk, with Christensen tagging her as a role model and great public servant and Schell complimenting her leadership of the 21st Century China Program.

“I don’t think there is another university that’s quite managed to galvanize a critical mass of interesting faculty and graduate students and fellows the way UC San Diego has,” Schell said. “The 21st Century China Program is sort of the heart and soul of that.”

The Revelle Medalist also offered a few words of her appreciation.

“I feel I’ve kind of grown up with UC San Diego. I’ve been here since 1975. I’ve seen it become a truly great, world-class university,” she said. “I feel I’ve managed to do a lot of interesting things and made some useful contributions.”