The inaugural event makes sense of cybersecurity, business and military tensions between China and the U.S. and what it means for San Diego 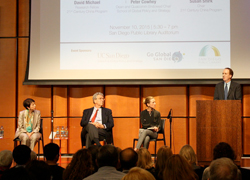 The UC San Diego School of Global Policy and Strategy (GPS) hosted the inaugural San Diego Global Forum on Nov. 10 at the San Diego Public Library. The forum marks the beginning of a collaboration between the School, the library and the San Diego Regional Economic Development Corp.’s Go Global San Diego initiative to facilitate open dialogue that uncovers how San Diego is engaged in shaping solutions for a transforming and interconnected world.

Michael, a senior adviser at Boston Consulting Group, underscored the importance of China to U.S. businesses, including those based in San Diego.

“If you’re in business of almost any size or scale, you cannot avoid the question of how you engage with China,” he said, noting the country is the No. 1 or No. 2 market to “just about every good and service in the world.”

A part of that engagement, he added, means coming to the realization that the Chinese economy is quite resilient. Instead of looking at China’s declining line of GDP growth, Michael encouraged to look at China’s income distribution that is shifting from a pyramid to a diamond.

People are moving out of poverty and into the middle or affluent class in China, Michael explained, which opens up opportunity for tech hubs such as San Diego to cater to China’s digital consumers.

But Cowhey noted to have productive innovation in the U.S., “We have to get cybersecurity right.”

A part of the challenge to that is “the offense has an inherent edge over defense in regard to cybersecurity … there is an advantage to being first by a substantial margin,” Cowhey said, adding there’s also that software is constantly changing and causing vulnerabilities in defensive technologies.

Though the means to “get it right” aren’t quite clear, Cowhey said what we do know is “cybersecurity is a hard problem, and China and the U.S. in their military capacities are investing heavily in their offensive capabilities.”

On a more optimistic note, Shirk said she sees China and U.S. goals aligning more on the global level such as with climate change. But that doesn’t negate the current friction between the two countries that is derived mostly from “the Asia regional neighborhood,” Shirk said.

“I can feel in a very vivid way the relationship is much more competitive and much more tense than it was in 2000,” she noted, offering her personal perspective on building a U.S. strategy for engagement with China as deputy assistant secretary of state under President Bill Clinton (1997-2000).

There now are more possibilities for military confrontation, she said, considering where U.S. support would be if China and Japan came to blows, if North Korea collapsed or if chaos in the South China Sea continues.

“We haven’t seen the last of these tensions and friction,” Shirk concluded. “I don’t think we’ll go back to the good ole’ days of the late ’90s, but it doesn’t necessarily mean World War III.”

View a photo recap of the San Diego Global Forum on Flickr.com.