As first-year students at the UC San Diego School of Global Policy and Strategy (GPS) get their bearings, some second-year master’s degree candidates are shifting their mindsets from that of a working professional back to a graduate student—and, for a few students, that also means overcoming jetlag to do so.

GPS students are encouraged to complete an internship during their programs, and almost 90 percent of them do so the summer after their first year, with positions spanning nearly every continent across the globe.

Here, we checked in with four second-year students to see where they wound up this summer. 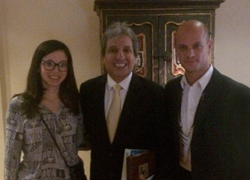 As an intern at the World Wildlife Fund (WWF), Joaquin Vallejo, Master of International Affairs (MIA) candidate 2016, never had a day that was one in the same.

In his first few weeks at his internship in Quito, Ecuador, Vallejo’s hometown, he had a hand in lobbying Latin American government officials to support and offer feedback on WWF’s declaration on protected areas as natural solutions to climate change. Sixteen countries adopted the declaration in August during the meeting of the Latin American Technical Cooperation Network on Protected Areas in the Lima, Peru.

The attention that declaration attracted such as from Peruvian Minister of Environment Manuel Pulgar Vidal and the Prince of Wales's charitable foundation, Vallejo said, was among the most rewarding facets of his summer.

“After that milestone, I helped develop and review the content of several communications pieces that WWF will use to position the declaration and get endorsement from other civil society organizations ahead of the Paris climate talks in December,” he said.

From an educational perspective, Vallejo said he developed a wider understanding of the role protected areas play as natural solutions to climate change. Additionally, he said he’s better prepared to search for climate change-centered jobs in the nonprofit sector after graduation.

“Environmental issues, specifically climate change, have been my passion for years,” he said. “Nothing is more rewarding than feeling your work can make a difference in what you care about. Don’t be afraid to follow that passion and show you really care about the issue.”

Getting a feel for the government 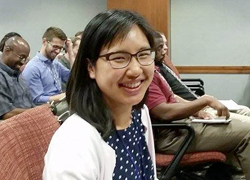 Edith Yuh, MIA candidate 2016, spent her summer on the East Coast, interning at the U.S. Government Accountability Office (GAO) in Washington, D.C. She served on the strategic issues team, which evaluates how well programs are performing in terms of human capital and budgeting, among other markers.

After a visit to the office in her first year at GPS through her Robertson Fellowship, Yuh worked closely with GPS Career Services to land a government internship.

“I put in almost 50 applications,” she recalled.

Now, recollecting on her summer position, she said it wasn’t entirely what she expected—in terms of the dense amount of desk work—but “in hindsight, I’m really happy about it.”

Conclusively, she said the experience taught her the inner workings of a government agency, plus offered some perspective about working in a team to finish long-term projects.

“Whether or not my final words are on a paper, I contributed to the final result,” she boasted.

A taste of marketing 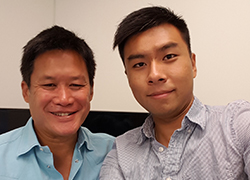 Eric Yang, Master of Pacific International Affairs (MPIA) candidate 2016, found himself not too far from his scholarly stomping grounds this summer, traveling north to Los Angeles for a marketing internship at Starz Entertainment.

The job was eye opening for Yang, to say the least.

“This experience taught me that everything is possible,” he said. “There’s no need for international students to master math for jobs. Marketing is a way. With the connections and possible recommendation letters on hand, I am confident there will be more possibilities in the future for me.”

Yang’s primary responsibility was researching Chinese television markets in preparation for a forthcoming joint venture between Starz and a Chinese multiplatform media company. The role also entailed writing summaries for supervisors and translating documents, among other duties.

Yang added that his supportive supervisors and coworkers were instrumental to his success.

“Entertainment is a very cutthroat business, and there is no room for mistakes,” he explained. “They baby-stepped me into a professional world and showed me what to do and not do in the office.”

Learning from other self-starters 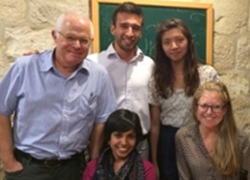 Israel Muñoz, MPIA candidate 2016, had his own venture top of mind as he ventured to Jerusalem this summer as part of Milken Institute’s Financial Innovations Lab.

Muñoz is the co-founder of Olympus Pay, a California-based company that offers a method for international peer-to-peer money transfers through the use of a debit card. Since taking roots in 2014, the company now is in the stages of developing Web, iOS and Android platforms for launch in China.

As a Global Fellow at Milken Institute, Muñoz became immersed in Israel’s tech startup sector, learning about finance and sustainable models for economic development projects in Israel, California and abroad through various labs, workshops and internship placements. Muñoz was placed as a product development intern at the crowd-funding platform OurCrowd.

“All in all it was an amazing experience that heavily complemented and influenced my own role as teammate, co-founder and leader as we build our own company,” he said, adding it was enlightening to “learn from other visionaries about the challenges and obstacles that any new technology being brought to market faces.”

To that end, Muñoz offered some closing advice for fellow classmates looking to pursue similar opportunities:

“Ask for guidance from those you look up to. I landed my position last minute through getting to know Visiting Professor Glenn Yago in a financial innovations course during spring quarter. Don’t be afraid to try new courses, projects and network.”

For a full list of where GPS students interned this summer, visit gps.ucsd.edu.