Peruse Kevin Watt’s resume, and one might note he isn’t the typical alum from the UC San Diego School of Global Policy and Strategy (GPS)—but he also couldn’t be happier about it.

Watt, MPIA ’09,  is the founder of Early Bird Ranch in Pescadero, Calif.

“It’s an integrated livestock operation,” he explained. “We produce livestock by mimicking how similar animals would have been grown or existed in natural systems.”

And though physically getting his hands dirty with the livestock doesn’t directly correlate with what he learned at GPS, Watt said the quantitative skills he gained at the School “has been the cornerstone” of his success.

“I’ve been able to build out these really awesome experiments and data sets that could change how we talk about sustainable agriculture,” Watt noted.

In addition, he has been able to lend that knowledge to colleagues who aren’t trained in it such as in his secondary role as an integrated land and livestock manager at TomKat Ranch Educational Foundation. In this position and at Early Bird, Watt conducts experiments and creates data sets related to greenhouse gases, including carbon emissions, from agriculture operations as well as methane emissions from grass-fed cattle, among other measures.

Beyond still literally pulling up notes from his Quantitative Methods I, II and III courses (QM1, QM2 and QM3), Watt said it’s in conducting these projects that he keeps GPS consistently top of mind.

“As I’m trying to get the data programs up and running here, my mind goes instantly into having GPS students be a part of this,” he said, noting of hopes to create an internship program at the ranch. “GPS provides you with a very broad skill set.”

While in School, Watt immersed himself in comparative political systems and electoral studies, with the goal of becoming a professor.  In doing so, he worked closely with GPS Professor Matthew Shugart, now a professor of political science at UC Davis whom he later co-authored on “Patterns of intraparty competition in open-list & SNTV systems” for Electoral Studies in 2013.

That mentorship turned into somewhat of a friendship, with Watt sometimes helping Shugart tend to his fruit tree orchard outside of school. 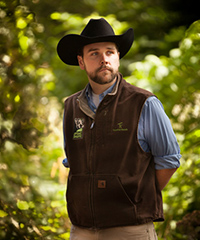 “I just loved every second of it,” Watt recalled. “I was steering all of the conversation from policymaking to these trees. That led me down a path to look at the economics and the production systems in our current food systems.”

He became captivated with learning more about sustainable farming practices primarily through models put forth by Joel Salatin, who has authored a series of books underscoring the notion that by mimicking nature in farming, you will yield better economical and ecological outcomes.

Take grazing habits as an example. Animals such as chickens, ducks, turkeys and pigs naturally follow large herds of ruminants such as cows. Early Bird now leases some of its land for grazing cows to, in turn, induce this natural pattern for its own livestock to graze after them.

It was in his second year at GPS—during winter break and after completing QM2, to be precise—that Watt took his curiosity in Salatin’s work to the next level by calling him in inquiry of an internship.

While Watt had nil firsthand experience in agriculture, Salatin still took the bait, inviting him to Shenandoah Valley in Virginia for a summer internship at his operation, Polyface, Inc.

The experience was a game changer, Watt said, marking the beginning of his “complete 180” in an international relations career he hadn’t even started yet.

Watt still recalls telling his wife, ShaeLynn (then girlfriend): “I’m just going to go and explore it. I’m not going to do anything rash.” Three days into his internship, Watt said he had her on the phone saying, “This is what I want to do for the rest of my life.”

The two have been moving forward in the sustainable agriculture sector ever since, putting down roots for Early Bird Ranch in July 2010.

Recollecting on his unforeseen career thus far, Watt noted, “You never know where life and where your passions will actually lead you.”