In a Q&A, the professor details what went into the making of his new book, “Open for Business,” and underscores its main points regarding Cuba’s economy 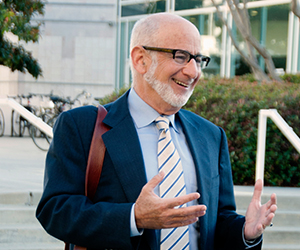 When news swirls about U.S.-Cuba relations, heads often turn to Richard Feinberg for an expert’s perspective—a perspective that’s sculpted from decades of engagement with U.S. foreign policy, based on his experience as a scholar, diplomat, policy adviser and corporate consultant.

And now, the professor at the UC San Diego School of Global Policy and Strategy (GPS) has authored a page-turner about the Latin American country that is in the thick of normalizing relations with the U.S. His new book is titled “Open for Business: The New Cuban Economy.”

Ahead of its release on Aug. 30, we connected with Feinberg for a look-see into the 220-page manuscript on the past, present and future of the Cuban economy.

How long has this book been in the works?

I’ve been publishing monographs on the Cuban economy with Brookings Institution, four of them since the beginning of 2011. Brookings Press actually proposed to me the idea of publishing a book when Cuba became a hot issue, when (U.S. President Barack) Obama and (Cuba President Raul) Castro announced the normalization of diplomatic relations.

Earlier, Cuba had been somewhat of a public policy issue under Obama, but it hadn’t been a headline issue. It was only in December 2014, when the dramatic announcement of the U.S. definitively altering 50 years of hostility, moving from a policy of hostility to a policy of engagement, that Cuba was in the news every single day. 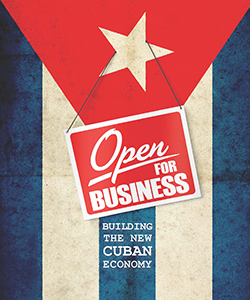 It was after the Dec. 17, 2014 announcement that the Brookings folks came to me and said: ‘Hey, you’ve got a lot of this work already done. Why don’t you pull it together, update it, add some fresh material and we launch it as a book.’

So, what is this “fresh material” you’ve curated for “Open for Business?”

When I was in Cuba in December, I interviewed a dozen millennials whom I define from the ages of 20 to 35. I asked them about the future, where do they see themselves professionally in 10 to 15 years and what they would like Cuba to look. Basically, all of these millennials —despite the obstacles that still exist in Cuba—are optimistic about their own futures.

They’re also optimistic that Cuba will become a more normal country. By normal, they mean fully normal relations with the U.S., that all this cross-strait hostility will be in the history books. ‘Normal’ conditions on the island will be a more decentralized, opportunity-oriented society as opposed to the situation today, which is heavily bureaucratic and political.

What are some of your main points in the book?

‘Open for Business’ looks at the past, present and future of the Cuban economy and society.
The past: The successes of the revolution—and how the Cuban economy got itself all tied up in knots. The present: An assessment of emerging private enterprise and case studies of successful foreign investments in tourism, mining, consumer products and international brands such as Unilever, Nestlé and Meliá Hotels International. And the future: Vignettes of a dozen inspiring millennials, their hopes and aspirations for themselves and for Cuba, finishing with three imagined scenarios for Cuba in 2030.

Why the name “Open for Business?”

‘Open for Business’ is a slogan the Cuban government is now using on some of its brochures targeted at foreign investors. But it remains more of a slogan than a reality. My book demonstrates this discrepancy with detailed case studies and suggests ways forward for Cuba to transform the aspiration into concrete facts on the ground—to the benefit of the long-suffering Cuban people.

Who should read this?

Certainly anybody interested in doing business in Cuba, buying, selling, investing in its future. Any educated reader who wants to travel to Cuba, this would be a great primer. And then I think people interested in U.S. foreign policy and developing country economics would also find it of interest. People interested in the Rolling Stones and Beyoncé might also enjoy this. These artists, among many others, recently visited Cuba!

May we expect a follow up publication to this … or perhaps there is one already underway?

I am currently researching a paper on the future of the tourism industry in Cuba—the best placed sector to add dynamism to the Cuban economy in the short to medium run. The government plans to add 100,000 rooms over the next 15 years, but for that to be accomplished, and in a sustainable manner, will require some vital policy innovations.

Pre-order the book via Brookings Press.