Granted participation in the Kakehashi Project in 2016, GPS sent a cohort of students to Japan to absorb the culture and make memories to last a lifetime

A mere week before the holidays, Victoria Holden found herself far away from her family in Connecticut. In fact, she was on an entirely different continent.

But on this particular morning, seated at a heated kotatsu with fellow classmates from the UC San Diego School of Global Policy and Strategy (GPS), she couldn’t have felt more at home.

Watching Sunday morning anime and indulging in a smorgasbord of traditional Japanese breakfast cuisine, the conversation at some point turned toward the U.S. national anthem. Lightheartedly, Holden and company broke into singing “The Star Spangled Banner.” What happened next was a testament to the bridges they were meant to build during their eight-day stay in Japan. Their host mom sang back to them Japan’s national anthem, “Kimigayo.”

“It was touching,” recounted Holden, a 2018 MIA candidate at the School. “This trip was a fresh break from the unease in the U.S. and a reminder of our partnerships abroad. The Kakehashi Project provided connections that would never have been available in a classroom setting.”

Fully funded and promoted by Japan’s Ministry of Foreign Affairs (MOFA), the Kakehashi Project is a student exchange program between Japan and the U.S. Through up-close views of Japan’s economy, society, history, politics and foreign policy, the excursion aims to broaden students’ perspectives of Japanese culture by planting seeds of deeper mutual understanding between future leaders in U.S.-Japan relations and also sowing new networks between the two countries.

Under the leadership GPS’s Japanese Language Lecturer Eiko Ushida and with chaperone assistance from GPS Career Services Director David Robertson, more than 20 students from UC San Diego—17 of which were from GPS—travelled to Japan as part of the project from Dec. 12-20.

“This program most certainly made a bridge—not a wall—between our two countries,” Ushida said. “It also demonstrated that seeing is believing. Without visiting and seeing a place, without interacting with its people directly, you cannot truly understand the country you are studying.”

Amid meetings with government agencies such as MOFA, the Ministry of Agriculture, Forestry and Fisheries and the Ministry of Economy, Trade and Industry in Tokyo, the whirlwind tour comprised travel from Tokyo to Gunma.

In the prefecture, students ventured through the towns of Kiryu and Minakami for a more intimate glimpse at Japan’s rural landscapes and livelihoods. This included stops at textile museums and silk mills, as well as tours of Mitsuba Corp. and Tsuchida Industries, plus the one-night homestay.

For Andrew Kincare, 2018 MIA candidate, the meetings with government representatives and agencies proved most enlightening, as they unveiled to him business partnerships between the U.S. and Japan involving cooperation in science and technology, climate change, global health and more.

Recanting Japan’s hefty foreign direct investments in the U.S. and impressive employment of Americans in multination enterprises, Kincare also remarked on what he learned about Japan’s agriculture industry—that it imports much of its products from the U.S. He added, Japan’s efforts to augment tourism could by seen in even the smallest gestures during their stay.

“It is hard to explain the level of care that was put into hospitality,” Kincare said. “Every time we arrived for a presentation, tour or meal, tabletops would be laid out very nicely. At one business they even put a fresh flower blossom at each table setting.” 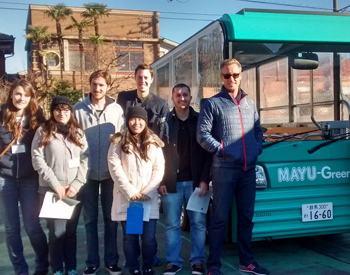 A self-denoted “public transportation nerd,” Holden pointed to riding the electric buses as another memorable moment from the trip, as well as learning about developments between the U.S. and Japan to partner in building high-speed rail systems in the coming decades.

“That Japan is prioritizing global connections and supporting lesser known cities through large investments is admirable,” she expressed, noting her fall quarter class Globalization, the World System, and the Pacific primed her well to learn about this firsthand during the Kakehashi Project.

The timing of the trip, Ushida added, was idyllic, given the election of U.S. President Donald Trump and his opposition to the Trans-Pacific Partnership (TPP), a trade deal Japan views fondly.

“During the trip, we had the opportunity to speak with someone involved with the TPP negotiations,” Holden said. “I felt privileged to hear a Japanese negotiator's perspective on the deal and future relations.”

It’s scenarios such as this that speak to the importance of immersion programs, said Aaron Crimmins, 2017 MIA candidate. 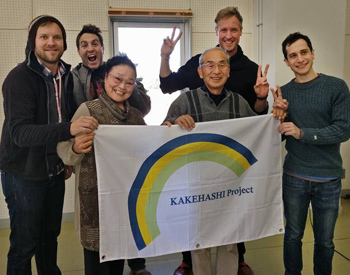 “The Kakehashi Project helped me to more thoroughly understand the nuances of Japanese culture that only a firsthand experience can give,” Crimmins said. “Walking through the streets of Tokyo or hiking in the hills of Minakami inspired a greater appreciation for how people live, work and interact with their world than a classroom ever could. … Meeting with MOFA officials and staying with a family gave me new insight into how the Japanese government and citizens think about my country.”

Moreover, Crimmins attested GPS’s Japanese language program prepared him well to communicate with residents while in country—considering he “knew not one syllable of Japanese” when he entered the School.

In addition to this gratification that her teachings paid off, from Ushida’s perspective, the trip also checked off a long-awaited item on her bucket list.

“This was the first time ever that I was able to bring students to Japan, my home country,” said Ushida, who has instructed at GPS for 14 years. “I’ve always wanted to do that. And I did it, finally. That is something I will never forget.”

For more of GPS students’ reflections about the Kakehashi Project, register to attend "Kakehashi: Student Panel on U.S.-Japan Economic and Social Ties” on Feb. 8. Also, view more photos from the trip.