Bank of Mexico governor to speak at GPS commencement

Agustín Carstens, governor of the Bank of Mexico and a global leader in international economics, will give the keynote address at the UC San Diego School of Global Policy and Strategy (GPS) commencement on Sunday, June 18. The event will see 148 graduating master’s students celebrate their achievement in front of faculty, family and friends.

Head of Mexico’s national bank since 2010, Carstens is a former minister of finance who has served as executive director of the International Monetary Fund (IMF) and member of the G-20 Financial Stability Board steering committee. Later this year, he will become the first central banker from an emerging economy to assume the role of general manager of the Bank for International Settlements, the world’s oldest financial institution bringing together 60 central banks that account for 95 percent of the world’s GDP.

“We are honored to have Agustín Carstens as this year’s commencement speaker, as he embodies our mission to train the next generation of global leaders,” said Gordon Hanson, acting dean of GPS. “Carstens has a long career helping to guide and stabilize the macroeconomy, certainly in Mexico but also throughout the world. His action and direction serve as great inspiration to our graduates.”

Lauded as the driving force of Mexico’s financial stability, Carstens has repeatedly been recognized as Central Bank Governor of the Year by multiple global organizations. He was ratified as head of Mexico’s bank for his first, six-year term in January 2010, proposed by then-President Felipe Calderon. In late 2015, proposed by President Enrique Pena Nieto, Carstens was reappointed governor for a second term.

He will assume his new position at the Bank for International Settlements in December 2017. The organization’s mission is to aid governmental banks in pursuing financial stability and to foster international cooperation.

“Our school is internationally recognized for its expertise on the Pacific — the Americas and Asia — and we seek to be the home of leaders, like Carstens, who value tackling global challenges with meticulous analysis and a passion for problem-solving,” Hanson said.

Carstens began his professional career in 1980 at the Bank of Mexico, where he held many positions in the central bank’s international department, economic research department and office of the governor. For the IMF, he represented the casting votes of Spain, Mexico, Central America and Venezuela, and later was responsible for handling the organization’s relationship with more than 70 member countries.

The GPS commencement ceremony follows the UC San Diego all-campus commencement on June 17, when UC San Diego Chancellor Pradeep K. Khosla will officially confer degrees by academic division. His Holiness the 14th Dalai Lama will give the keynote address to all graduates gathered as one student body.

GPS will bestow 110 MIA degrees, 31 MAS-IA degrees and seven BA/MIA degrees to graduates. For the June 18 ceremony, the graduating students and more than 675 guests will gather inside RIMAC Arena at 1:30 p.m. It also will be broadcast live on the School’s website. 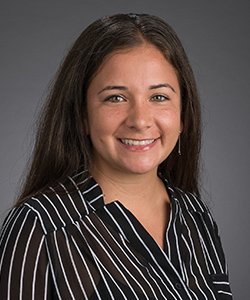 Each year, a graduating GPS student is nominated to speak to graduates and guests. The 2017 commencement student speaker is Daniela Pardo-Yepez, a 2017 MIA candidate focusing on international development and international public policy.

A Dean’s Fellow and UC San Diego Graduate Student Association representative, Pardo-Yepez’s short-term goal after graduation is to work as a consultant for the Ecuador government’s Welfare Ministry, focusing on projects that deal with poverty alleviation and conditional cash transfers, orphans and the adoption system, and public-health programs. In the long term, Pardo-Yepez said her goal is to be a policymaker. She served as the vice president of internal affairs for both GPS’s Development Club and Latin America Student Organization.

In addition to the degrees being awarded over commencement weekend, GPS offers a joint Ph.D. in Political Science and International Affairs with the Department of Political Science. In 2018 and 2019, the School will graduate the inaugural cohorts of its MPP degree program and MCEPA degree program, respectively.